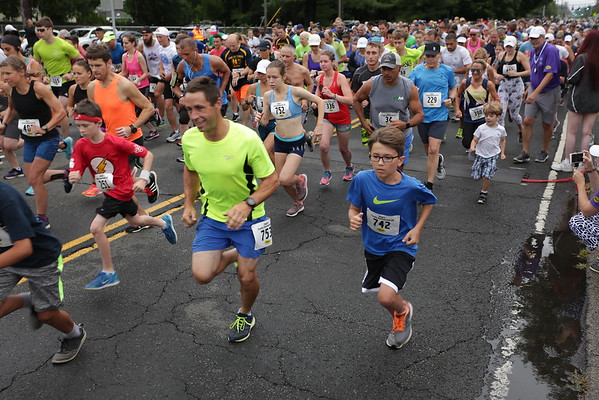 PLAINVILLE - What do you get when you cross 500 runners with 200 walkers and 200 pancakes?

The 11th annual event went off smoothly Sunday, despite an impending rainstorm whose whereabouts were uncertain all Sunday morning.

“It’s very heartening to see how much support we get,” Dr. Bill Petit said after congratulating participants, many of which have come year after year.

Those three names belong to Petit’s former wife and two daughters, who lost their lives in a 2007 home invasion in Cheshire. In its 11 year history, the road race has raised well over $1 million for the Petit Family Foundation, which supports young women in the sciences, people with chronic illnesses and those affected by violence.

Programs for youth at the Connecticut Science Center are among the beneficiaries of the foundation’s generosity.

President and CEO Matt Fleury and his family all came to Sunday’s race.

“Bill has been working with our team for years now, and we are very grateful,” Fleury said. “Science needs women scientists and they have helped us get more girls involved in the sciences.”

Among the race’s top finishers was 84-year-old Bristol resident James Driscoll, whose daughter Kathy Laferriere was proud to support her dad from the sidelines.

“I am amazed,” she said of his performance. “I didn’t inherit those genes I guess.”

Driscoll said the run was “rather tough” for him, but nothing the survivor of cancer and multiple heart attacks couldn’t handle.

“There might not be too many more of these for me,” he said with a chuckle. “I’m just out here having fun and taking care of my health. It’s a great bunch of people and a worthy cause.”

Driscoll added of his running, “You’ve got choices in life. Either you keep going or you don’t go.”

Among the foundation’s causes is a youth internship program at the Beardsley Zoo and the Connecticut Children’s Hospital’s Hayley Petit Injury and Violence Prevention Fellowship. The initiative sponsored four female college students’ recent completion of a six-week program at the hospital, learning how to prevent unintentional injury and violence from medical experts.

Teen pregnancy prevention program Pathways Senderos, based in New Britain, is another beneficiary.

“I’m glad we’re able to support such a wonderful cause that came out of such tragic circumstances,” Bristol resident Mark Mangelinkx said after crossing the finish line with his wife Sharon.

“This is our first time at this race,” she added. “I’d definitely come again next year. It’s such a great atmosphere. Everyone is very encouraging.”

The pair is part of Connecticut’s Run 169 Towns Society, whose members aim to participate in running events in every town in the state.

Plainville High School students Tyler Mandeville, Wyatt Lacombe and Ryan Snyder did not run this weekend, but they did come to the race. All three boys volunteered their time helping facilitate activities around the event, which included food service from Chip’s Family Restaurant and Saint’s Restaurant, along with a fun run for kids.

“We always have a good time here,” Mandeville explained. “It’s for a good cause.”