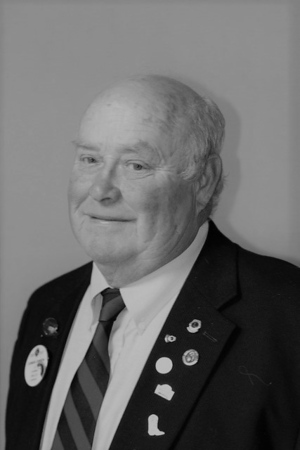 Leonard “Len” Carl Johnson of Terryville, age 80, passed away at home on the morning of Aug. 6, 2022. He was born Dec. 4, 1941, in Plymouth, the third child to parents, Herta and Carl Johnson; married to his beloved wife, Lani Beck Johnson in July 1972. Following high school, Len served as a member of the Army Reserves as a Supply Sergeant. As a young man, Len enjoyed painting, the joys (and other emotions) of keeping a mid-century domestic automobile running smoothly, and skiing in Vermont, with a stint as a member of the ski patrol at Stratton Mountain.

After some time working for Plymouth Public Works, as well as serving on school building committees, Len spent much of his career as a Heavy Machine Operator until his retirement from D’Amato Construction. A proud and active member of the Terryville Lions Club since 1962, Leonard held numerous leadership roles and Board of Directors positions in his local club for over 20 years. He was a Life Member, served on the District 23B Cabinet in various positions, and had the honor of serving as 23B District Governor. He is the recipient of various awards, including Knight of the Blind, Ambassador of Sight, and Melvin Jones Fellowship.

For his local club, Len loved helping with the delivery of Christmas baskets and the Santa Display in Baldwin Park. He spent many years working at the Terryville Country Fair, managing Indoor Concessions when it was still a giant tent and following that, he enthusiastically brought the old-fashioned sport of Women’s Iron Skillet Toss to the Fair.

He was preceded in death by his parents, Herta and Carl, sisters Nancy Nyren and Christa Russell, brother Richard Johnson, and wife, Lani. Len is survived by his sons, Timothy Johnson, and Carl Johnson and daughter-in-law, Stephanie, grandchildren Kirsten, Hailey, and Aiden; brother-in-law Roy Nyren of Virginia, brother-in-law Rick Beck and his wife, Joan, and numerous nephews and nieces.

For those wishing to pay their respects to Len, visitation hours will be between 4-7 p.m. on Friday, Aug. 12th at the Scott Funeral Home, 169 Main St. Terryville, with military honors to follow, and a celebration of life at the American Legion Post 20, 245 Main St. Terryville. Lions are asked to meet at the funeral home by 6:15 p.m. for a Lions service at 6:30 p.m. In lieu of flowers, please consider sending donations to the Terryville Lions Charities. P.O. Box 72, Terryville, CT 06786.