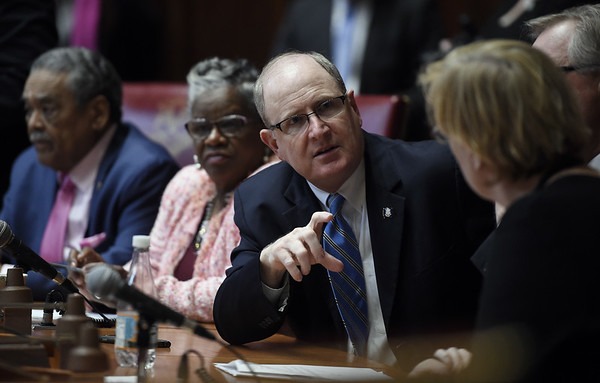 Republican state legislators raised concerns Tuesday that a planned external audit of Connecticut's school construction funding program may fall short of what's needed to get to the “truth” about what, if anything, was amiss in a contracting process currently under federal investigation.

Senate Minority Leader Kevin Kelly, a Republican from Stratford, said the independent auditors being hired by Democratic Gov. Ned Lamont's administration should look into the municipalities that received state school construction grants, considering some local officials have said they felt pressured to hire certain contractors for those projects.

“The guiding principle here should be getting to the truth, not getting to a fast answer,” Kelly said during a confirmation hearing for Michelle Gilman, Lamont's nominee for Department of Administrative Services commissioner. “I think the purpose here is to get transparency, to get to the truth, to restore public confidence in their government. And what we need to do is whatever it takes to get there.”

Oversight of school construction grants was originally administered by the Department of Administrative Services before moving to the Office of Policy and Management when Diamantis moved from one agency to the next. It's now handled by DAS again.

Republicans have made the federal probe an election-year issue.

An attorney for Diamantis has said his client “broke no law” and “many of the claims of undue influence and so forth are people who simply don’t understand the state bidding process.”

Gilman said Tuesday the Lamont administration expects to hire an independent auditing firm or firms in the next few days. They will conduct a forensic audit, examining five years worth of hazardous materials contracts as well as how internal state agency auditors scrutinized the school construction grants program during that time period, said Noel Petra, interim director of the Office of School Construction Grants and Review at the Department of Administrative Services, last week.

Gilman said the goal is to have the outside audit completed by the end of April, calling it a “very aggressive schedule.” Gilman said the scope of the external audit may eventually be expanded. She tried to assure Kelly the Lamont administration shares his concerns about finding out what happened and making any necessary changes.

“Senator, we have the same goals in terms of meeting the transparency and restoring confidence in this program. And the governor has said that publicly,” Gilman said, noting the various steps being taken to update procurement and contracting policies and procedures and boost state ethics training.

“Make no mistake that this will be a very comprehensive audit. It will not be on a fast track in terms of a sloppy process or procedure,“ Gilman said of the outside analysis. ”It will be done accurately and professionally.”