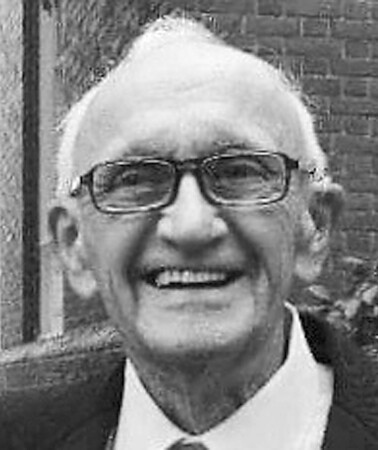 ‚ÄúHave cane, am able‚Äù. Have you ever heard a worse pun? Our father thought it was the most clever of puns from the biblical story of Kane and Abel, and he subjected his Quail Hollow friends repeatedly to it as he encountered them on his walks with his trusty cane. You can imagine the eye rolls. Our father, Joseph Zalaski Jr., a master punster in his own mind, passed away peacefully at home on January 6th, 2021.

Born April 11, 1929, son of the late Joseph Zalaski Sr. and Anna (Dul) Zalaski, he spent most of his life in Terryville and Bloomfield. He was senior class president of Terryville High School, on the debate team, and popular amongst his classmates. He went on to attend the University of Conn. where he earned his bachelor‚Äôs degree, master‚Äôs degree, and sixth year diploma in education. He began his career as a history teacher at Terryville High School from 1952-1960. In 1961, he was the first to hold a full-time position as guidance counselor and, in 1962, was the very first to be named Director of Guidance. In 1963, he accepted a guidance counselor position at Bloomfield High School and worked there until his retirement in 1988.

Joe married Lois McAloon on June 17, 1950, and, together, they ventured to Stonington, Maine, located on Deer Isle, where he took his first teaching job. Eventually Joe and Lois returned to, and settled in, Terryville. By the age of 34, he and Lois were raising six children ranging in age from newborn to 11. Our dad worked numerous jobs and endless hours to support our family and ensure that, no matter how tight the budget, we enjoyed a memorable vacation each year in Weekapaug, R.I. Yet, a part of Dad‚Äôs heart had stayed in Maine, and he took every opportunity to drive its coast and return to Deer Isle. He became a walking encyclopedia of the State of Maine and had his favorite spots, always making sure to stop for his blueberry pie at Moody‚Äôs, stay at the Sheepscot Inn in Edgecomb, and drive the coast to Boothbay Harbor. At home, Dad enjoyed his daily bike rides around town, and no minor accident or fall would deter him from the next trip. He also enjoyed building furniture, endless house projects, and reading about history.

Dad was a kind and thoughtful guy, who always made sure the mailman would stop at our house for a drink and a snack. In the summer months, he made sure to leave cold drinks at the end of the driveway for the hardworking men who collected garbage. He was a fierce advocate for those in need, and often told the story of recruiting a co-worker to impersonate a health inspector, and the two proceeded to shut down a group home where disabled residents had been severely neglected. During his summer job as a supervisor and bus driver of young workers who picked tobacco leaves in the sweltering heat, Joe rallied them to stand strong and demand their legally earned lunchtime and breaks they had previously been denied.

Our home in Terryville often welcomed disabled and less fortunate members of the community to enjoy a winter holiday meal or cold drink in the summer. He always treated them with the same generosity, dignity, compassion, and respect that he put forth to everyone around him. This was an extension of our father‚Äôs devotion to his younger brother, Michael Zalaski, whom he cared for throughout his life. Working sometimes three jobs at a time, Dad consistently drove to Southbury Training School to pick up his brother Michael, attend meetings there, and advocate for the STS residents and their families. Eventually, he became president of the STS Parents Association. Years later, he ensured that his brother Michael was moved to a community group home where Dad and Mom continued to visit and take Michael on various excursions.

Dad was a strict and devoted father. With six children, he endured the clashing teenage years -and we endured him. When complaining about his rules and restrictions, we can still hear his famous phrase, ‚ÄúThis is not a democracy.‚Äù His other favorite proverb, ‚ÄòWhen the going gets tough, the tough get going,‚Äô will forever echo.

Growing up, we didn‚Äôt know any other family who had a coal stove and cellar full of coal. But we did hear Dad get up in the dead of night all winter long and shovel coal into that stove to keep us all warm. So, we forgive him for his notorious and purposely bad singing in the car, making us change the oil on the cars on holidays, getting us lost in that little boat in R.I., and for his endless bad puns.

Dad had many wonderful attributes which he undoubtedly passed on to his children. He was intelligent, had great writing skills, and was politically savvy, as seen in his oldest son, Thomas. He was a devoted friend, kind listener, and endured hardships by always extending himself to help others, as seen in his daughter, Jo-Ann. He was hard-working, a quick learner, and always the quiet observer who noticed things others often missed, as seen in his son, John. He had a critical eye and could size you up in a minute. He loved cars and knew how to fix them and, in his spare time, enjoyed a good book, as seen in his son, Matthew. He could make a stranger feel comfortable and heard, was a wonderful teacher, and had a super sharp wit, as seen in his son, Josh. He was a fierce advocate, lived his ethics, and voiced his opinion no matter what others thought, as seen in his daughter, Lisa. These attributes are scattered amongst his seven grandchildren and six great grandchildren. He delighted in giving each of his grandchildren a special nickname, one that sticks with many of them to this day. He adored being ‚ÄúGrandpa‚Äù and ‚ÄúPapa‚Äù, a role which seemed to spark in him a joyful patience and silly playfulness that will live on in the hearts of his grandchildren forever.

Dad loved the spouses of his children as he loved his own, which was evident in their caring for him through his last days. Denise was always there to give him a nice clean shave and warm shampoo. Jennifer made the best soup and her laugh always made Dad smile. Derek took Dad for his cherished rides to the Old Marsh, and Mark was always there to fix Mom‚Äôs TV, or anything broken.

Dad‚Äôs love and loyalty to his wife Lois is unmatched. After 70 years of marriage, he could still be heard saying, ‚ÄúThank you, my doll,‚Äù or ‚ÄúThank you, my love,‚Äù as she gave him his cup of coffee or placed a pillow behind his head in his last days. Despite his many quirks and little hang-ups that drove her absolutely crazy (‚ÄúIs the car in park?‚Äù ‚ÄúMake sure the toaster oven is unplugged!‚Äù), Lois remained devoted to the end.

Joe also leaves behind a special niece and godchild Cathryn Krinitsky (John Swanke), who was available at a moment‚Äôs notice, always checked in and supported Mom, and made sure Dad was able to virtually participate in his son Matthew‚Äôs wedding to Gerri, whose medical expertise and gentle support were so greatly appreciated.

The family would like to thank Bristol Hospice, namely Allison and Arielle, who are amazing caregivers and medical professionals. We also thank his previous team, Suzanne, Elliott, and Matthew. You are all wonderful!

Service will be private at the convenience of the family. Memorial Donations can be made to the Bristol Hospital Foundation, Home Care and Hospice Fund, P.O. Box 977, Bristol, CT 06011-0977. www.scottfuneralhomeinc.com