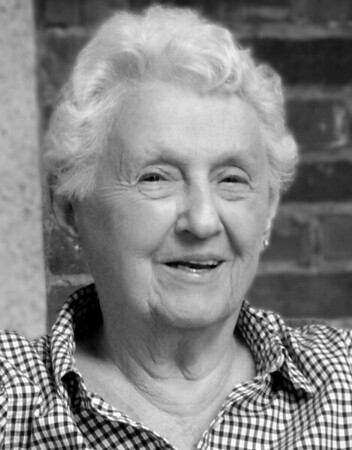 Adeline (Maher) Kuchta of Southington died on Saturday, September 26, 2020, at the age of 94. Known to friends and family as “Chick” or “Chickie,” Adeline was a devoted wife and mother. She was married for 70 years to Edward “Ed” Kuchta until his death in May of this year.

Adeline was born in Bristol, Connecticut on October 15, 1925 to William and Adeline (Keith) Maher. She grew up in Bristol, graduating from Bristol High School in 1944. After high school, she worked at the Funk Furniture Store in Bristol.

She met Ed, a Southington native, at Lake Compounce in the late 1940s, and the two were married in Forestville on May 20, 1950. Adeline and Ed raised six children together. When her children were mostly grown, Adeline returned to the workforce, notably as a sales associate at Patrick Baker & Sons, the religious goods supplier in Southington. She and Ed lived at Spring Lake Village in Southington for nearly 30 years. In their later decades, Adeline and Ed had the opportunity to travel, visiting their far-flung children, making trips to Europe, and spending a part of each winter in Florida. For the last few years she was a resident at LiveWell in Southington, where she was fortunate to receive great care and attention from a dedicated staff.

Adeline is survived by her children and their spouses, Robert Kuchta and Storm Matthies Kuchta of Madison; Nancy Sayre and Christopher Sayre of Denver, Colorado; Janet deWilde and Hamish deWilde of Loudon, Tennessee; David Kuchta and Jennifer Tuttle of Portland, Maine; Lynn Van Winkle and Peter Van Winkle of Fairfield; and Michael Kuchta and Karen Weintraub of Cambridge, Massachusetts; and by eleven grandchildren and two great-grandchildren. Adeline was predeceased by her three siblings: Thomas William “Billy” Maher of Unionville, Catherine “Kitty” Mellon of Bristol, and Virginia Rindfleisch of Ocala, Florida.

A memorial service will be held when it is once again possible to gather in groups. The DellaVecchia Funeral Home in Southington has been entrusted with the arrangements. Donations may be made in her memory to the Kuchta Family Scholarship Fund, c/o Robert Kuchta, 85 New Road, Madison, CT 06443. The scholarship has been established to aid Southington High School graduates planning to attend college.