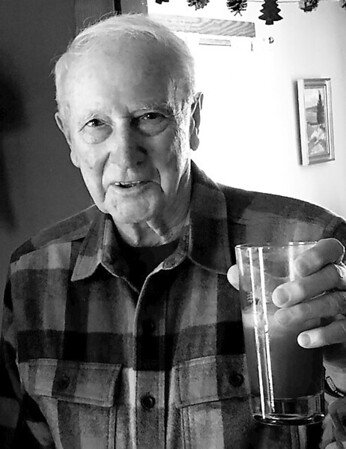 Malcolm “Scotty” Graham passed away on July 26, 2020, after a brief battle with cancer at age 89. Born August 10, 1930, in Dundee, Scotland the son of Robert Adams Graham and Rose (Harrow) Graham. He graduated from The Grove Academy in Broughty Ferry, Scotland and emigrated to the United States in 1948 working for Aetna Insurance in Hartford, CT for 3 years. In 1951 he entered the U.S. Army and served in the 14th Infantry in the Korean War. In 1953 he concluded his Korean tour of duty and served in the U.S. Army Reserve until honorably discharged in 1959. Malcolm became a naturalized U.S. Citizen in 1955.

In 1953 he married Ethel Warner Barrett of Bristol, CT. They were happily married for 62 years until Ethel’s passing in 2015. Malcolm worked for the Wm L Barrett Co. in Bristol for 39 years first as Purchasing Manager and later as Vice President until his retirement in 1992. Malcolm and Ethel retired from Bristol to a new home at Olde Pointe in Hampstead, NC where they enjoyed many years of golf and mild winters together. In 2012 they moved to Falmouth, ME to be closer to family. They made many travels over the years including Hawaii, California, Scotland and Europe.

During his many years in Bristol, Malcolm was an avid member of the Older Members of the Bristol Boys Club, The Italian Social Club and Chippanee Golf Club.

Malcolm is survived by his son Robert Graham and his wife Karen of Portsmouth, NH, daughter Linda Neubelt and her husband Thomas of Bradford, VT and daughter Sandra Sohn and her husband Keith of Windham, ME as well as his brother James Graham and his wife Linda of Nipomo, CA. He also leaves behind 7 grandchildren and 5 great grandchildren and is survived by his special friend Sandie Roberts of Yarmouth, ME with whom he was able to make a final trip to Scotland in 2018.

Beginning in 2017 Malcolm became a tireless volunteer at Partners for World Health in Portland, ME where he made many friends and helped distribute desperately needed medical supplies to needy peoples around the world that would otherwise have been discarded and destroyed by donating New England area hospitals.

Only two weeks ago, Malcolm received a Maine Volunteer Role of Honor award for an astonishing 968 hours of work he’d already performed in 2020.

Due to Covid-19 there are no funeral arrangements. The family will conduct a small graveside service at West Cemetery, Bristol, CT at a date to be determined. In memory of Malcolm, kindly consider a donation to Partners for World Health, 40 Walch Drive, Portland, ME 04103 or at www.partnersforworldhealth.org .

To share memories of Malcolm or to leave the family an online condolence please visit, www.athutchins.com .