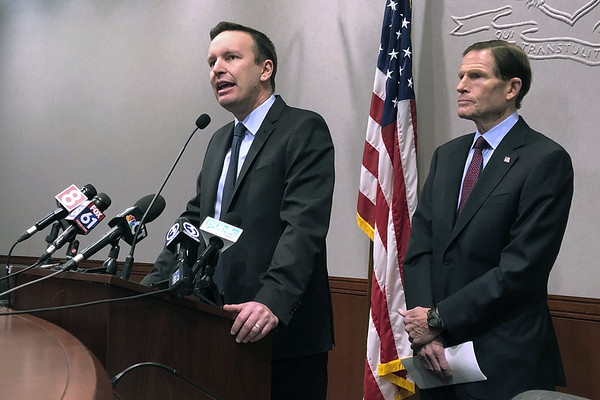 HARTFORD (AP) - Connecticut’s two U.S. senators, both Democrats, voiced serious concerns Friday about the ramifications of killing Iran’s top general, questioning whether President Donald Trump and his administration have a plan to protect Americans from reprisals.

Sen. Chris Murphy, a member of the Senate Foreign Relations Committee, said previous Democratic and Republican administrations also had opportunities to kill Qassem Soleimani but chose not to out of concern his death might make him a martyr and consequently make him more dangerous to the U.S.

“My guess is that the assassination of Soleimani will lead to greater harm to U.S. personnel, U.S. citizens and U.S. interests,” Murphy said during a briefing with reporters at the Legislative Office Building with fellow Democratic U.S. Sen. Richard Blumenthal.

Both Murphy and Blumenthal, who agreed Soleimani has been a deadly enemy of the U.S. for years, said it is imperative the Republican administration meet with Congress immediately and explain why it took this action to protect Americans abroad and how it plans to protect the nation and its interests from any deadly response from Iran and its proxies.

“The concern I have now is American security, the safety of Americans in the region and around the world, men and women in uniform, our diplomats and ordinary citizens. And I’m concerned as well about the security of our nation here at home,” said Blumenthal, a member of Senate Armed Services Committee, which he said should hold a hearing immediately on the attack.

“I want to hear from the administration the strategy for protecting Americans abroad and at home, and equally important the straetgy involved in this assassination,” he said.