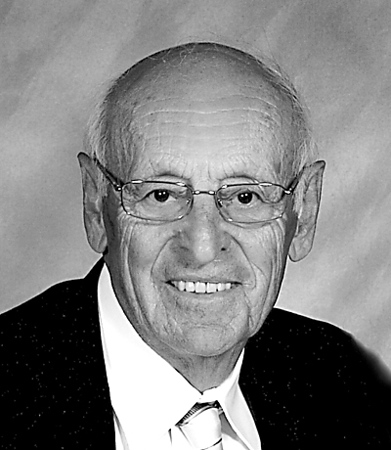 Wilmar T. “Will” Lagassé, 91, of Bristol, beloved husband of Joan (Soucy) Lagassé, died Wednesday, Sept. 4, 2019, at home surrounded by family. Will was born in Grand Isle, Maine, on March 3, 1928, and was a son of the late Levite and Rosa (Chassé) Lagassé. Raised in Grand Isle, he came to Bristol in 1948. He attended high school at Marist Prep Seminary in Bedford, Mass., then college at CCSU (the former Teacher’s College in New Britain), and Hillyer College at the University of Hartford, where he received his master’s degree and 6th-year certificate for teaching. He enjoyed a career as a teacher in West Hartford, first at Talcott Junior High School then at Hall High School, where he taught math and French before retiring in 1992.

He worked in retirement for 10 years at Funk Funeral Home in Bristol. He served the City of Bristol as a member of the Bristol Development Authority and the Zoning Board of Appeals and was a member of the Knights of Columbus Palos Council #35. He was an active parishioner of St. Francis de Sales Parish attending St. Ann Church, where he established the Dinner Club, taught CCD, was a choir member, past-president of the PEA, a member of the parish council, a lector, volunteered at bingo, was a founding member of the Nifty Fifty Travel Club, and a member of the League of Sacred Heart.

He enjoyed traveling with Joan, working in his yard where he designed and crafted many beautiful rock walls and landscaping, and spending time at their home on Cape Cod. In addition to his wife of nearly 66 years, Will is survived by three sons and daughters-in-law, Joel and Rosanne Lagassé of Orleans, Mass., James and Elizabeth Lagassé of Simsbury, and Ted and Karen Lagassé of Brewster, Mass.; a daughter, Monique Norrie of Bristol; a brother and sister-in-law, Joseph and Lonnie Lagassé of Bristol; a sister, Edmie Lagassé of Bristol; nine grandchildren, Evan Lagassé and wife, Erin, Danielle Benscoter, and husband, Joe, Benjamin, Andrew, Peter, Annie, Grant and Rachel Lagassé, and Olivia Norrie; five great-grandchildren, Ava and McKenzie Lagassé, Sophia, Tyler, and Emily Benscoter; and several nieces and nephews. He was predeceased by a son, Marc Andrew Lagassé; son-in-law, Scott Norrie; and three sisters; Jean Corbin, and brother-in-law Roland Corbin, Sr., Cecile Lagassé, and a young sister, Yvonne.

Funeral services will be held Monday, Sept. 9, 2019, at 9 a.m. from Funk Funeral Home, 35 Bellevue Ave., Bristol, to St. Ann Church, 215 West St., Bristol, for a Mass of Christian Burial at 10 a.m. Entombment will follow in the Holy Family Mausoleum, Bristol. Relatives and friends may call at Funk Funeral Home, Sunday, between 3 and 6 p.m. In lieu of flowers, memorial donations may be made to the Bristol Hospital Hospice, C/O Bristol Hospital Development Foundation, P.O. Box 977, Bristol, CT 06010. Please visit Will’s memorial website at www.FunkFuneralHome.com .