Lamont to Central Conn. Chambers: State must get fiscal house in order

05/13/19 Wesley Bunnell | Staff Governor Ned Lamont spoke with the Central Connecticut Chambers of Commerce on Monday in Bristol. Governor Lamont answers a question from the audience. Buy this photo 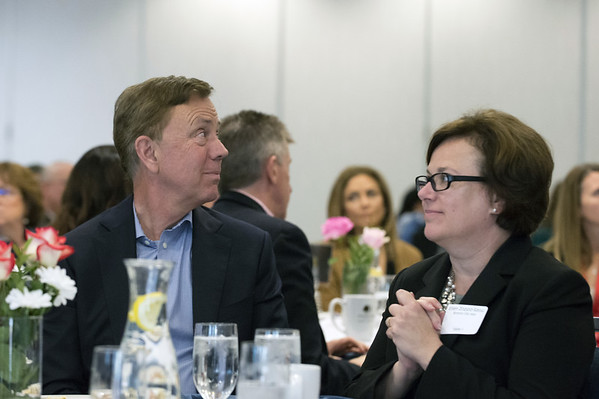 05/13/19 Wesley Bunnell | Staff Governor Ned Lamont spoke with the Central Connecticut Chambers of Commerce on Monday in Bristol. Governor Lamont looks at the podium as he is introduced to the chamber while seated next to Mayor Ellen Zoppo-Sassu. Buy this photo

BRISTOL - In talking to businesspeople across the state, Gov. Ned Lamont says, he keeps hearing two things: First, get the state’s fiscal house in order, and second, “Fix the damn roads.”

Lamont spoke at the Connecticut Outlook 2019 lunch, hosted by the Central Connecticut Chambers of Commerce Monday at the DoubleTree by Hilton hotel.

He started by referring to his early career as a “cable guy” in the telecommunications industry, recalling what ESPN was like in the early 1980s.

Bristol-based ESPN was charging about 30 cents a subscriber, while HBO was charging about $3, but ESPN has grown into an “amazing company and, if I had to guess, it’s going to be the Netflix of sports by the end of this decade,” he said.

“I’ve only been your governor for about 120 days but it’s been long enough you can start blaming me for stuff, I think,” he joked to the chamber audience. “One of the first things I wanted to do was meet the business leaders, large and small, and reestablish a relationship with state government that I thought had been fractured over the years.”

In addressing the number one item he said he hears about, Lamont acknowledged “the economy is strong but our fiscal house is a mess. We’ve got a lot of work to do, but I think we’ve started doing it in a really serious way.”

He said the state budget that is now in front of the state legislature will reduce employee pension costs by “hundreds of millions of dollars” over the next two years, and he is also confident the state will also be about to reduce the cost of its employee health care by “well over $100 million” by next year.

In addition, “we’ve been borrowing too much, we’re addicted to debt,” he said. “Over the last eight, nine years, our appetite for bonding has gone up by about $600 million a year. “We’ve been on a bond binge and it’s time to go on a debt diet.”

As “the first business guy that has been in this job in generations,” Lamont said he is working to restructure state government. One way he cited is he brought in Josh Geballe to head the Department of Administrative Services, which is responsible for all the state’s IT services.

Historically it has always been a political person in that job, but Geballe worked for 12 years at IBM and started an IT platform company, so he can oversee consolidating all of the state’s IT services, which are currently fragmented across the different departments, Lamont said.

And with about 30 percent of the state’s 45,000 employees expected to retire in the next few years, many of those jobs could be filled with people with more IT skills, he said. “I think you’ll see a state government that looks very different in the next five-plus years - a lot smaller, a lot leaner.”

Lamont’s second big topic was transportation infrastructure, “coming up with a reliable, predictable revenue stream that allows us to dramatically upgrade our transportation system.”

“Our transportation system in this state is old,” he continued. “We’re going over 90-year-old bridges. They are ‘structurally deficient.’ Don’t panic - they’re safe but they’re deficient, and it’s costing us tens for millions of dollars just to maintain them.”

Supposedly “it takes longer to take the train from New Haven to New York today than it did 25 years ago and than it did 100 years ago,” he said. “We are part of two major urban centers, Boston and New York. We’ve got to do a better job of interconnecting them.”

Lamont said everyone agrees the state will have to come up with another $600 million or $700 million a year to fix the roads and bridges and speed up the rail lines, the Republican leadership is calling for bonding that money. “It’s the exact opposite direction of where I think we ought to go.”

He favors electronic highway tolls as a “pay as you go” solution, of which “well over 40 percent of that would be paid for by out-of-staters, and some of the major trucking companies here.” The cost would be mitigated for state residents by a proposal to have discounts for state residents and frequent drivers.

“So those are some of the things we’re thinking about, but at the end of the day there’s no disputing that we have to fix our transportation system, and it would be the most transformative thing we could do to get this state growing again,” he added.

Lamont said he wants to “hold the line on taxes” and give state residents “a sense of confidence that slowly we’re getting this ship of state turned around.”