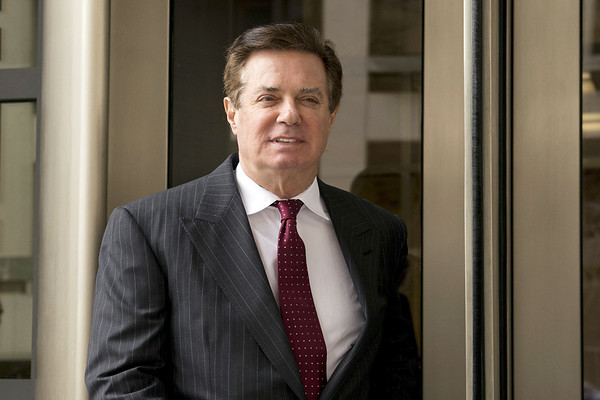 FILE - In this April 4, 2018 file photo, Paul Manafort, President Donald Trump's former campaign chairman, leaves the federal courthouse in Washington. The 69-year-old Manafort is scheduled to appear Thursday in U.S. District Court in Alexandria, Virginia, where he could get 20 years under federal guidelines but his lawyers have sought a shorter sentence. Manafort was convicted of hiding from the IRS millions of dollars he earned from his work advising Ukrainian politicians. (AP Photo/Andrew Harnik) Buy this photo
Published on Thursday, 7 March 2019 20:14
Written by THE WASHINGTON POST

WASHINGTON - Paul Manafort, who once served as President Donald Trumpâ€™s campaign chairman, was sentenced to nearly four years in prison Thursday for cheating on his taxes and bank fraud - a spectacular fall for a once high-flying political consultant who told the judge he is now â€śhumiliated and ashamed.â€ť

Manafort, a New Britain native, had faced up to 24 years in prison under federal sentencing guidelines, but U.S. District Court Judge T.S. Ellis called that calculation â€śexcessiveâ€ť and sentenced him instead to 47 months.

Ellis said the sentence he imposed was more in line with others who had been convicted on similar crimes.

â€śThe government cannot sweep away the history of all these previous sentencesâ€ť for similar crimes, the judge said.

But the judge expressed some sympathy for Manafort, a 69-year-old GOP consultant who worked on the presidential campaigns of Gerald Ford, Ronald Reagan and George H.W. Bush.

â€śHeâ€™s lived an otherwise blameless life,â€ť Ellis said. The judged noted Manafort has no past criminal history and â€śearned the admiration of a number of peopleâ€ť who wrote letters to the court support Manafort.

Wearing a green jail uniform with the words â€śALEXANDRIA INMATEâ€ť in block letters on the back, Manafort entered the courtroom in a wheelchair.

â€śThe last two years have been the most difficult years for my family and I,â€ť Manafort told the judge. â€śTo say that I feel humiliated and ashamed would be a gross understatement.â€ť

Speaking from his chair, Manafort did not apologize for his crimes, but thanked the judge for how he had conducted the trial.

Manafort said the â€śmedia frenzyâ€ť surrounding the case had taken a toll on him, but that he hopes â€śto turn the notoriety into a positive and show who I really am.â€ť

The worst pain, he said, â€śis the pain my family is feeling, â€ś adding that he drew strength from the â€śoutpouring of supportâ€ť he had received.

The hearing came just days before Manafort is set to be sentenced for related conspiracy charges in a case in D.C. federal court.

Manafortâ€™s trial last year documented his career as an international lobbyist whose profligate spending habits were part of the evidence showing heâ€™d cheated the Internal Revenue Service out of $6 million by hiding $16 million in income.

Prosecutors painted the former Trump campaign chairman as an incorrigible cheat who must be made to understand the seriousness of his wrongdoing. Manafort contends he is mere collateral damage in special counsel Robert Mueller IIIâ€™s investigation into Russian involvement in the 2016 presidential election.

At the outset of the hearing, Ellis addressed the larger special counsel investigation, saying Manafort was not convicted â€śfor anything to do with Russian colluding in the presidential election.â€ť