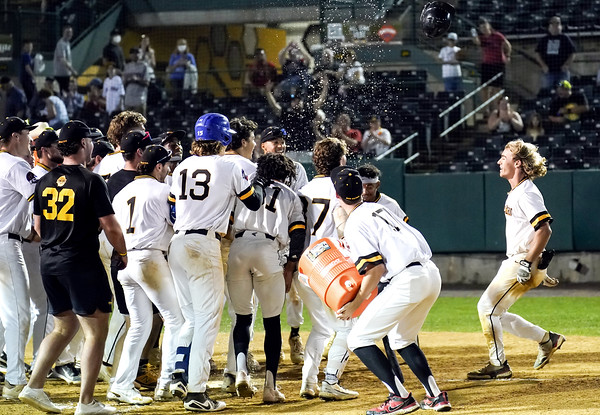 Dan Heary 3B Tyler Pettorini running home after a walk-off HR in the bottom of the 10th on Wednesday to beat the Pittsfield Suns 6-5. Buy this photo
Published on Thursday, 4 August 2022 13:06
Written by Cameron Beall

NEW BRITAIN – For the first time as a member of the Futures Collegiate Baseball League, the New Britain Bees have clinched a berth into the postseason. They did so with their win over the Worcester Bravehearts on Tuesday and widened the gap on Wednesday in walk-off fashion over the Pittsfield Suns.

With less than a week remaining in the regular season, the focus now shifts to where the Bees will place when the playoffs get underway on Monday. After Wednesday’s win the team came one step closer to owning home field advantage in the best of three opening round series.

Prior to any games on Thursday the Vermont Lake Monster remain comfortably in the driver’s seat with a 7.5 game cushion between themselves and the Bees and will go into the playoffs as the top seed.

New Britain and the Nashua Silver Knights are the two teams to watch down the stretch. The Knights sit two games behind the Bees and will need to close that gap for a chance to play at Holman Stadium on Monday instead of the Hardware City.

The fourth and final bid to the postseason currently goes to the Westfield Starfires who are the only team yet to punch their ticket to the playoffs. The Starfires will be trying to stave off the Norwich Sea Unicorns, Worcester Bravehearts and Pittsfield Suns over the final four games. They currently reside 2.5 games in front of Norwich, 3 games ahead of Worcester and have 4 games on Pittsfield. The Brockton Rox have been eliminated from postseason contention.

Bees manager Matt Gedman sees the importance of this final week and trying to maintain the No. 2 seed in the tournament. He explained how the Bees are a “different team at home,” where they own a .630 winning percentage. He said the pitching should be lined up to finish out the week after a strong start on Wednesday. T.J. Wainwright pitched through five innings allowing one run on six hits.

Something Gedman and the Bees – along with the rest of the league – have had to battle down the stretch, however, is the revolving door of players that can be present in summer baseball. The Bees have seen players join the team late and make an immediate impact, like outfielder Mark Coley, who went deep in Wednesday’s slugfest. Teams also see players get shut down or leave the team midway through the summer like Ryan Daniels, Mick Kelley and most recently Teddy Schoenfeld.

Losing one of the league’s most productive hitters in Schoenfeld is never something a team wants to endure. Gedman thinks this year’s version of the Bees, however, have a bond strong enough to avoid any issues.

“It’s a little bit of a shuffle but as long as you keep bringing in good guys, good people and good baseball players that feed off of each other’s energy and know the culture and what we’re trying to do there’s no issues in the clubhouse,” explained Gedman.

The FCBL postseason will get underway on Monday with the No. 4 seed heading to Burlington for a date with the Lake Monsters. The No. 2 seed will host the No. 3 seed as well on Monday. The lower seed will host game two of the series on Tuesday with the higher seed hosting Wednesday if a winner-take-all game three is necessary.