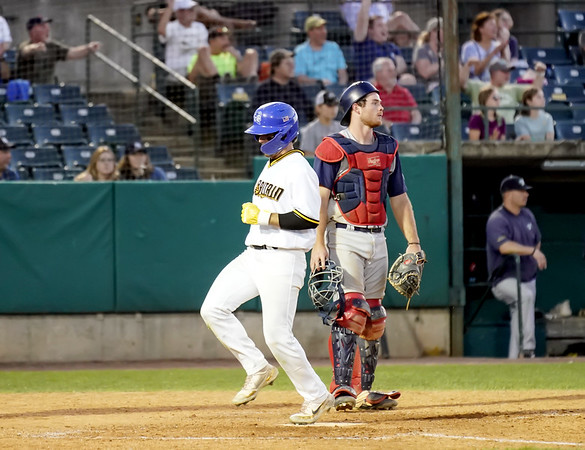 NEW BRITAIN – In four of the New Britain Bees five games prior to the weekend they had to do it the hard way and come from behind to win. This was once again the case on Friday night when they came away with their third win over the Worcester Bravehearts over that same stretch.

The Bees found themselves down 4-2 when catcher Keegan O’Connor stepped into the box to lead off the bottom of the eighth inning. O’Connor promptly lifted the 1-1 pitch into the left-center gap for a double. This was the beginning of what became the biggest inning of the night for New Britain and manager Donnie McKillop said this was a script his team has become all too accustomed to.

“We just knew that when [O’Connor] had that leadoff double that something special was going to happen that inning,” McKillop said. “Our guys have seen it enough that they believe late in games… It seems like hitting is contagious for our guys. We run with momentum pretty well and I think everything is going pretty well for us right now.”

Left fielder Teddy Schoenfeld echoed the same message after having a front row seat to Friday night’s heroics, noting, “we show up in big spots.”

Schoenfeld was on deck when center fielder Joel Lara had warning track power with extra help from the Bravehearts who misplayed the long fly ball. Lara coasted into second base scoring a pair to take the lead back.

In a league that can be focused on individual work for the players, Schoenfeld has been impressed with the amount of resolve within this group.

“There are a lot of different wheels turning at all times and it’s interesting to see that kind of team aspect,” Schoenfeld said. “With some teams you don’t get that.”

Lara and Schoenfeld were able to steal their way into scoring position before Lara got caught in a rundown to end the frame.

McKillop says the team speed has been one of the greatest strengths of his group on the field this summer. Not only on the basepaths where Lara’s 26 stolen bases have nearly doubled up the next highest total, but on defense as well. The Bees are currently sporting the cleanest defense in the FCBL this summer with a .959 fielding percentage and 38 errors – both league bests.

The Bees’ league-best defense has played a hand in the team’s confidence in their pitching staff as well. They held Worcester scoreless over the last four innings en route to the victory. For McKillop, he simply stated, “we’re pitching the hell out of the baseball even when our backs are against the wall.”

As for what the Bees need to do to get ahead earlier in games and not rely on late-inning theatrics, Schoenfeld is looking for more intent in the box early in games.

“It’s not always the easiest thing to do but having a good approach in your first three at bats as while the pitcher is getting comfortable too is huge,” Schoenfeld said.

The Bees won’t be back at home until Wednesday when they host the Brockton Rox.