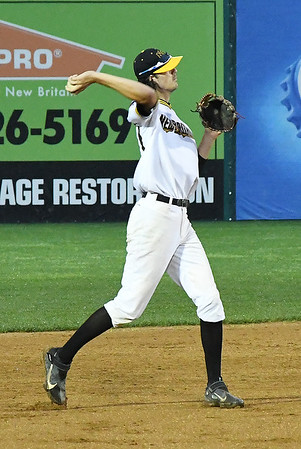 New Britain is the host series for this yearâ€™s Future Collegiate Baseball League All-Star Game on July 12 at New Britain Stadium and eight players from the Bees will take the field that night to represent the best of their team.

Three pitchers and five position players from New Britain will team up with players from the Pittsfield Suns, Vermont Lake Monsters and the Westfield Starfires to make the West team in the contest. They will face players from the Brockton Rox, Nashua Silver Knights, Worcester Bravehearts and Norwich Sea Unicorns.

Broadhurst will additionally be the Beesâ€™ contribution to the home run derby taking place the night before the all-star game. He leads the FCBL with five home runs and is batting .337 with 30 hits and 18 RBI.

Bagdasarian, Broadhurstâ€™s teammate at Eastern Connecticut State University, leads the FCBL with a .360 batting average with 32 hits and eight extra-base hits, also league-bests. He shares the league lead in hits with Hyde, who also has 32 hits with a .291 batting average and leads the Bees and the league with 25 RBI.

Petersen is one of two players on New Britain to play in 30 games so far this season and is hitting .245 with eight extra-base hits and 17 RBI.

Ritchâ€™s .271 batting average is the fifth-best on the team and his 23 runs scored is tied for second-best. He has five doubles as part of his seven extra-base hits and has 18 RBI.

Cafaro has a team-best 1.22 ERA in 14.2 innings over seven appearances with 22 strikeouts. He has a 4-0 record to go along with one save out of the bullpen this year.

Duquette is also pitching for New Britain without making any starts this year, posting a 1.99 ERA with 22 strikeouts over 22.2 innings. He has a 4-1 record in 12 appearances as another reliable late-inning arm for the Bees.

The Bees play Pittsfield on Friday and two games against Vermont over the weekend before coming back to New Britain for the break.