John Mikosz pitches with a runner on for New Britain in the eighth inning of Saturday's contest against the Westfield Starfires. | Tyler Hetu Buy this photo 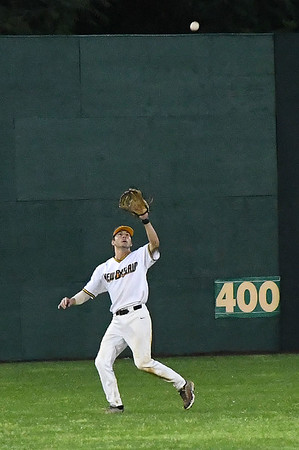 The New Britain Bees picked up a win over the Westfield Starfires Saturday night, winning 3-1.

With rain coming in and out throughout the game, the Bees and Starfires never entered a delay and played through the contest. Before the rain started, the Bees picked up two quick runs to take a lead in the first inning.

A leadoff hit from Alec Ritch was nearly stretched into a triple to start the day for New Britain, but he was caught trying to extend it to third base. Ryan Bagdasarian followed with an infield single, and Luke Broadhurst walked after him to put two on.

A Davis Cop RBI single put a run across in the inning, getting Bagdasarian to score from second on an infield hit.

A stolen base in the following at-bat by Cop saw him cleanly steal second, drawing a throw to second. On the throw, Broadhurst took off for home and was safe by a few feet to extend the score to 2-0.

“We got on them early and put up a two spot, … it was just a great start to the game and we sustained it,” said Bees head coach Donnie McKillop.

The score remained 2-0 until the fifth inning. A Luke Masiuk base hit into right-center field was legged out for a triple, but the relay throw into third base was sailed into the third base dugout, allowing him to score on the dead ball play.

Westfield's lone run in the game came in the eighth inning on an RBI double from Jaden Brown to score Cole Bartels.

Julian Tonghini pitched no-hit baseball into the fifth inning before allowing a base hit. It remained a one-hit game until the eighth inning, where the Starfires put one across and threatened for more - but was unable to.

With John Mikosz in for the final three innings, McKillop had no worry, even when he was tagged for two hits and a run.

“When Mikosz is on the mound, we’ve got a lot of confidence in him. His stuff is great and he can locate his stuff where ever he needs,” said McKillop. “… He gave up that hit, definitely a solid hit, … after getting a walk and a hit and shutting down the next two hitters, he never had a doubt.”

McKillop also praised the defense for smooth work in a wet and slick field, despite one throwing error which did not come back to bite the Bees.

Tonhgini finished the night with six innings pitched, one hit allowed, four walks and eight strikeouts. It was his second game of the season, and a beauty said McKillop.

“He got a little [bit] of a delayed start with us because he’s a high school kid, so we had some graduation stuff,” said McKillop. “It was his second time on the mound and both times he’s been pretty electric. … Just a great pitcher with great stuff. We know when he’s up there we can win.”

The Bees tallied five hits, two belonging to Bagdasarian. Cop had the only RBI.

“Offensively we were OK. We had good at-bats, we were productive at putting runners on,” said McKillop.

Four runners were left on base by New Britain in the win. There were five stolen bases for the Bees, two coming from Bagdasarian and one each coming from Broadhurst, Cop and Todd Petersen.