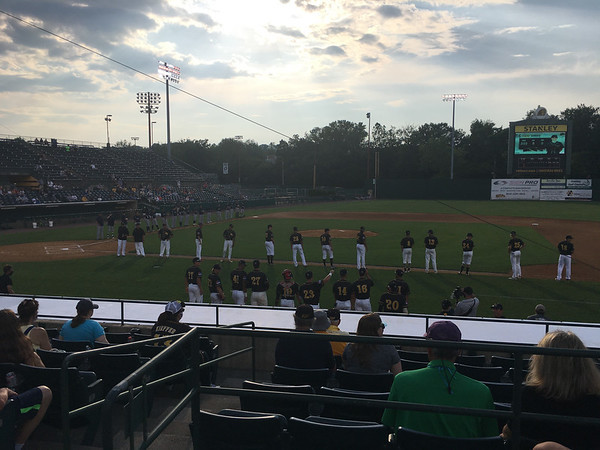 NEW BRITAIN — The New Britain Bees have been in action for nearly two weeks, as the Futures League began its delayed season on July 2. The Bees have struggled since their victory on opening night at New Britain Stadium, dropping five of their last six, including two straight defeats following a 12-9 loss to the Brockton Rox on Sunday afternoon.

The Bees’ loss on Sunday dropped them to last place in the Futures League, as the Rox moved ahead and out of the cellar with the victory in New Britain. The season is not even a fortnight old, but in a 39-game season, Futures League teams have already played nearly 20% of their games, so let’s check in on how the Bees have been stacking up against the rest of the league so far.

The big story for New Britain has been Andrew Cain. The senior from the University of New Haven has been raking since the start of the season, ripping a two-run double on opening night and never looked back. Cain was named the Futures League Player of the Week last week, hitting .444 with a home run and four RBI over that first week. On the season as a whole, Cain is atop the Futures League in batting average among hitters with more than 10 at-bats on the season, hitting .433 in 30 at-bats through seven games. Cain’s six doubles are also tops in the league, as the infielder has proven to be one of the elite hitters in the league so far.

Noah Martinez has also been one of the top hitters in the league this season, batting .346 in 26 at-bats, while also drawing six walks. Martinez has already had four multi-hit games, including the past two contests. The CCSU sophomore’s ability to reach base has been a big boost for New Britain this season, with his .469 on-base percentage ranking tops on the team. Derek Tenney of the University of Hartford has lifted his batting average to .333 thanks to a strong performance over his last three games, picking up five hits, including a 3-for-4 day on Sunday, including two doubles.

As a team, the Bees’ offense has been strong, ranking third in the league in hits, batting average and OPS. But the team could use a bigger boost in the power department, ranking fifth out of six teams in the league with a .351 slugging percentage.

On the pitching front, the team is third in the league in ERA (4.74) as a staff, but when New Britain’s arms make mistakes, it has often ended with disaster, as the team has given up six homers in seven games, the worst mark in the league.

The Bees have also struggled in the control department, allowing 49 free passes so far this season, the second-highest mark in the league (the worst mark in the league is Nashua, which has issued 50 walks). But the biggest issue for the New Britain in terms of run prevention has been the defense, which has given its pitchers very little room for error.

The Bees committed five errors in Sunday’s loss to the Rox, pushing their season total to 15, which is the most in the league. They’ve also only had 258 total chances, the third lowest in the league, which makes the 15 miscues even more glaring, and explains the league-low .942 fielding percentage. Bees manager Ray Guarino believed the defense was one of the most refined aspects of the team when the season began, but so far, it’s been New Britain’s most crippling struggle.

Again, the sample size is small, but in a drastically shortened season, two weeks is a significant sample size. The Bees have their share of efficient hitters, but they will need better command from the pitching staff and a much more improved defensive effort to start their climb back up the standings.