"I knew I was getting a hit that at-bat': Former New Britain standout Rivera gets Bees' first hit as Futures League team 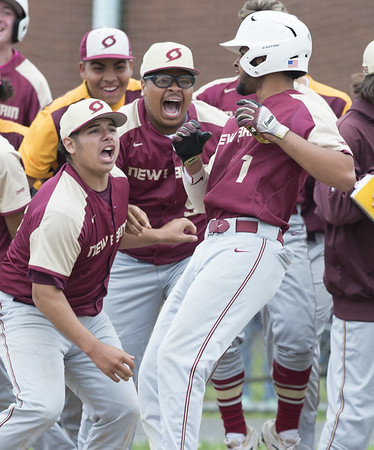 NEW BRITAIN - Danniel Rivera has plenty of familiarity when it comes to representing New Britain on the baseball field.

The former Hurricanes star collected 102 hits in his high school career, tied for the second-most in program history. His 102nd hit was a go-ahead home run in the top of the 12th inning against rival Southington in the first round of the Class LL state tournament, one of the biggest hits of his baseball career.

Rivera has experienced the pressure of an extra-inning postseason game, but on Thursday night, it was an early at-bat, the first plate appearance of the first inning, where the New Britain native felt he had to get a hit.

Leading off Thursday night’s season opener for the New Britain Bees, Rivera represented the first batter in the franchise’s history as a Futures League team.

“There was no question I was getting a hit that at-bat,” Rivera said after the Bees opened their shortened season with a 6-0 win over the Worcester Bravehearts. “I had so much confidence going up to plate and once I got that hit, it felt good.”

Rivera received one of the loudest ovations of the night as he stepped to the plate to begin the bottom of the first, specifically from the section of New Britain Stadium directly behind the Bees’ on-deck circle. Three rows of the section were occupied by Rivera’s family and friends, who all came out with custom-made white t-shirts with the Bees logo on the front, and Rivera’s name and number on the back. Their cheers grew louder when Rivera recorded the first hit in Bees’ Futures League history with a lined single into left field.

“It feels great,” Rivera said. “Just to kick things off and get the first hit for the franchise and give the crowd a show.”

For Rivera, that kind of support could be a regular occurrence at New Britain Stadium this year, as his family lives less than five minutes from the ballpark. He rewarded his loved ones for their support with a historic hit that felt fitting coming off of a city native’s bat, and gave his family something to cheer about after waiting six extra weeks to see Rivera represent the Hardware City in a Bees uniform after the 2020 season was delayed due to the coronavirus outbreak.

“My family couldn't be any more supportive than they are,” Rivera said. “Going out and making those shirts and bringing that kind of energy, it just motivates me to have a good game and leave it all out there on the field.”

Rivera struggled the rest of the way in Thursday’s season opener, striking out four times and finishing 1-for-5, but that one hit, and the 6-0 win, was what he and his family remembered after they swarmed him on the field after the game to take family photos with the man who found the hit column for the first time in the franchise’s new era.

“That's awesome for him to do in front of his whole family,” Bees head coach Ray Guarino said. “He played great at second base ... and the hometown hero gets the first hit for the franchise in the Futures League. Good for him.”