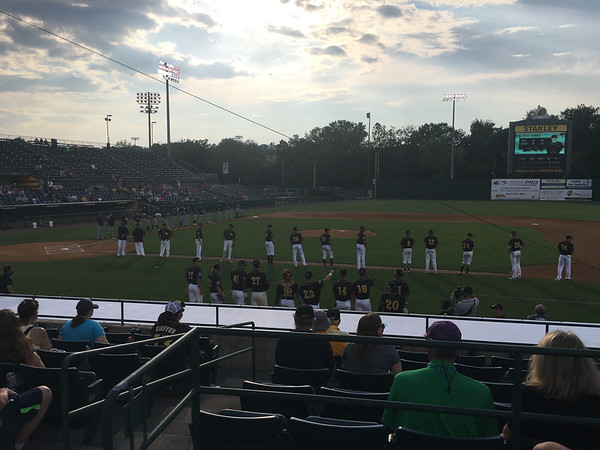 NEW BRITAIN – For the first time since last September, the lights came on at New Britain Stadium.

The New Britain Bees, playing in their first season as a part of the Futures League, opened their season on Thursday night to a socially distanced sellout crowd, welcoming back baseball with a 6-0 win over the Worcester Bravehearts.

“There’s nothing better than winning,” Bees manager Ray Guarino said. “But with Opening Day, these guys were excited, and I was just as excited to be out here and to get a win.”

The game was sold out, but plenty of seats remained empty, as the social distancing guidelines laid out to prevent further spread of the coronavirus limited New Britain Stadium capacity to 25 percent, but according to Bees general manager Brad Smith, all 1,500 available tickets were sold prior to first pitch.

The ceremonial first pitch was thrown by New Britain Health Director Sergio Lupo, who was standing alongside Mayor Erin Stewart, and each of them drew two of the loudest applauses of the evening after being acknowledged for their efforts in helping bring live baseball back to the Hardware City after the season had been indefinitely delayed.

The first hit of the Bees’ season was a fitting one, with New Britain native and New Britain High School graduate Danniel Rivera leading off the bottom of the first with a line drive single to left, to the delight of Rivera’s personal fan section behind home plate. The former Hurricanes star had three rows of family and friends decked out in custom “Rivera” t-shirts, who all erupted when Rivera’s liner fell in for the first hit of the season.

“That was awesome for him to do that here,” Guarino said of Rivera’s hit. “You could see he’s got like 60 people here. He played well…the hometown hero gets the first hit for the Bees in the Futures League.”

Rivera was stranded in the first, but New Britain broke through in the bottom of the second when Todd Peterson led off the frame with a hard single to left. Peterson took off for second on a wild pitch, and when the ball took an awkward bounce off the wall behind home plate, Peterson broke for third and just beat the throw. With two outs and two strikes, Tony Socci cracked a base hit to left to score Peterson and put the Bees ahead 1-0.

Looking to pad its lead in the bottom of the sixth, New Britain loaded the bases with nobody out to bring up Peterson, who poked a two-run single into right to make it 3-0 Bees.

“That was great, that got us hyped,” Rivera said of Peterson’s clutch hit. “It brought our energy to a different level.”

With runners at the corners and Ryan Bagdasarian at the plate, Peterson broke for second, and advanced to third after the throw bounced into center field, allowing another run to score to extend the lead to 4-0.

Worcester avoided further disaster by turning a double play on a bullet lineout to center field, but New Britain continued to pour it on in the seventh, when Andrew Cain pounded a two-out double to the wall in dead center to score two and extend the lead to 6-0, ensuring a win in the first chapter of the Bees’ new era.

“To get a win in front of 1,500 fans…we just wanted to put a good product on the field and hope these guys all come back,” Guarino said.