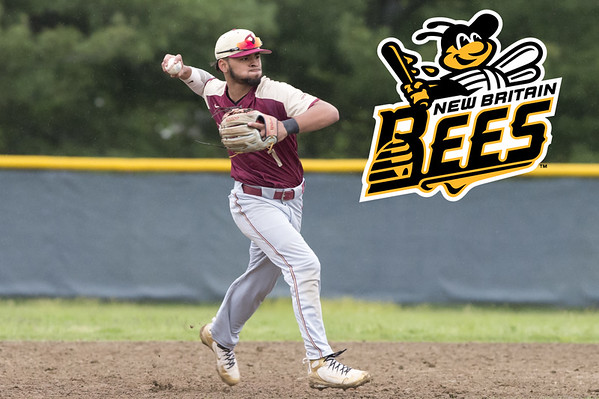 NEW BRITAIN - When the New Britain Bees take the field for the first time as a Futures League team this spring, a local kid will be donning the yellow and black after wearing the red and gold for four years.

Danniel Rivera, an All-State shortstop and pitcher with the New Britain baseball team, signed with the Bees for the 2020 season on Friday, cementing where Rivera will play for the summer after completing his first season at Division-II Southern New Hampshire University.

“I am hyped to represent my hometown,” Rivera said. “Let’s get it going.”

Rivera, born and raised in the Hardware City, racked up three all-conference selections during his time with the Hurricanes on top of his All-State nod during his senior season. His final at-bat of his high school career was a dramatic go-ahead home run in extra innings against Southington in last year’s state tournament, good for the 102nd hit of his high school career, which is the second-highest total in program history.

Rivera graduated as the team’s all-time leader in runs scored with 72 before committing to Southern New Hampshire.

Now, another part of that journey for Rivera will be through New Britain Stadium, right next door to Beehive Stadium, which he called home for four years.

“Danniel was born and raised here in New Britain, he knows the city, he knows what it takes to be successful here, and has the talent to do so,” Bees general manager Brad Smith said. “He checks off all the boxes for us, and we are excited for him to be the first player announced for the 2020 season.”

The first player announced for the Bees’ roster is a fitting one, and Rivera’s former coaches and teammates will be watching Rivera’s summer closely. They won’t have to travel far to do so.

“All of us in New Britain are extremely proud of Danniel and we look forward to seeing him play with the Bees in the Futures League this summer,” Hurricanes head coach Roberto Mercado said. “Danniel has an opportunity to showcase his talents and what a blessing for him and his family to get to do this right in his hometown.”