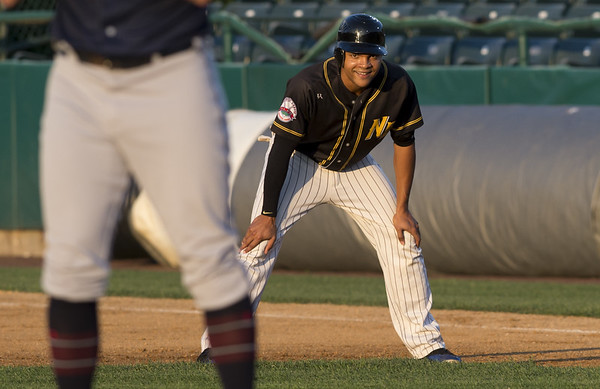 The New Britain Bees defeated the Somerset Patriots 7-6 in the bottom of the 8th on what was scheduled to be a 7 inning first game of a doubleheader. Jared James (11). | Wesley Bunnell | Staff Buy this photo
Published on Thursday, 5 September 2019 17:40
Written by RYAN CHICHESTER

NEW BRITAIN - The next three weeks will define the season for the New Britain Bees.

Sitting five games back in the Liberty Division and three in the Wild Card race, time is running out to break into the playoffs for the first time in franchise history.

The Bees, perhaps motivated by their place in the postseason race, have played better of late, having lost only one of their past six series, but to make this kind of comeback, more will be needed.

A slow start to the second half of the season put New Britain in an early hole, and in a situation where it needs help from outside sources to make that last leap into true postseason contention.

Unfortunately, at least as of late, the Bees have been getting no such help, particularly from the first place Long Island Ducks, who have won six in a row to move New Britain a game further behind in the standings, despite the Bees winning five straight themselves.

“It’s been a little frustrating,” Bees hitting coach Chuck Stewart said of the scoreboard watching. “When the Ducks lose, it seems like High Point wins. But we’ve played solid, and I really believe we can catch High Point. We’ve played well against them and we have remaining games against them.

“And Long Island, who knows what will happen with that. If we get lucky and win this half, it will be us against them, and if not, we have potentially two Wild Card spots, depending on if Sugar Land can come through in the other division. I know we’re only a couple of games away from that. We’ll see how it all shakes out. It certainly should be interesting.”

There are a few possibilities for the Bees to get in, as Stewart lays out, and the team is confident that at least one of those avenues will open up and give New Britain a way into October baseball.

The clearest route would be a stretch of victories that makes the Bees less reliant on help from other squads. Looking at the schedule ahead, New Britain believes such a run is possible.

The season then concludes on the road against the Patriots, giving New Britain a wealth of winnable games to end the regular season, and a number of opportunities to make up ground.

“I think the schedule falls in our favor,” Stewart said. “Somerset hasn’t been playing that well and we just saw Lancaster and think we match up well with them. High Point comes in next and we can get direct games from them. We’ll see where it takes us. We just have to keep winning.”

On paper, the stretch run for the Bees is the perfect time to chip away at the division deficit, and/or put themselves in a wild card spot should that become relevant when the season concludes.

Pieces are falling into place. It’s just up to New Britain to do its part to make sure those pieces stay in place, and remain there through Sept. 22, when the season comes to an end.

“Our rotation and bullpen is a little more solidified,” Stewart said. “Things are coming together at the right time. If we can get a little lucky and the ball bounces our way, I think we can make a run.”