Despite struggles at home, New Britain Bees set for three big series down the stretch in own confines 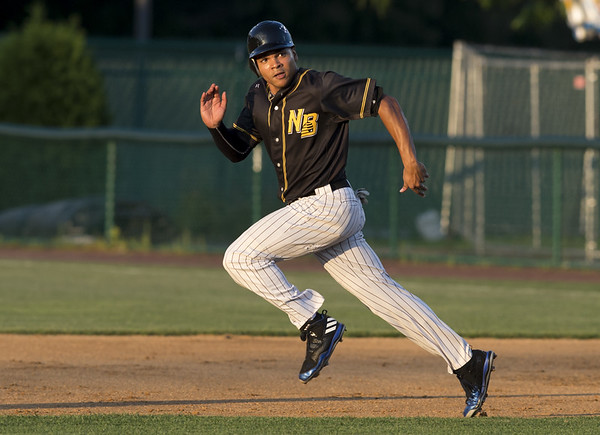 The New Britain Bees defeated the Somerset Patriots 7-6 in the bottom of the 8th on what was scheduled to be a 7 inning first game of a doubleheader. Jared James (11). | Wesley Bunnell | Staff Buy this photo
Published on Wednesday, 4 September 2019 20:37
Written by RYAN CHICHESTER

NEW BRITAIN - The New Britain Bees have just five series left in the regular season, and three of them will take place in the Hardware City. Given the Bees’ current standing in the postseason race, those home series will likely carry a great amount of importance.

Should the Bees be excited about the bulk of their remaining schedule taking place at New Britain Stadium?

Most would assume so, but playing at home hasn’t been all that friendly to the Bees so far this season.

New Britain holds an underwhelming 26-29 mark at its home stadium so far in the regular season, compared to 33-31 on the road. Normally, for most teams in the Atlantic League, those numbers would be reversed, but the Bees haven’t had such success in front of their own fans.

Still, New Britain is throwing out its past performance at home. It doesn’t matter anymore, and it maybe never did. Rather than seeing their record at home as a cause for concern, they’re looking at it as just a part of the game.

“I think it’s just the randomness of baseball,” Bees hitting coach Chuck Stewart said. “Sometimes you get motivated to play in front of other crowds, but I think the home field is really going to help us down the stretch.”

The Bees mainly face teams below .500 for the remainder of the regular season, but their only remaining games left against teams above the .500 mark will take place in New Britain.

The Bees have five home games left against the Sugar Land Skeeters and three against the High Point Rockers, two teams in second place in their respective divisions with small gaps sitting between them and first place. Considering the Bees are close behind the Rockers in the Liberty Division, those games will be crucial. If New Britain wants to make the playoffs, it will simply have to play better at home.

But what if Stewart and the Bees are right? Is the team’s past performance in the Hardware City nothing more than a random string of unfortunate events?

Since the All-Star break, the Bees have played seven home series and won just one of them, though it was a pivotal one against the Rockers, when they won three of four. Aside from that lone bright spot, the Bees have been swept twice by the York Revolution, lost two three-game sets to the first place Long Island Ducks and dropped another two to the Southern Maryland Blue Crabs, a team that’s consistently been below the .500 mark.

While recent numbers don’t bode well for the Bees, they won’t put any weight on it. In the team’s eyes, those fortunes are bound to turn at some point, so why not now?

“Our record will get a lot better with these home games,” Stewart said. “I think we’ve had it with the road, and we only have Southern Maryland and Somerset left (on the road). I think this is a home stand that will really benefit us.”

After a grueling season that began back in April, maybe the end of a season is the perfect time to string together victories at home, when there is less travel to wear you down, and more for the opponent in the opposite dugout.

The Bees, still chasing a postseason berth, feel energized for the stretch run, and the comfort of their own beds could be enough to sustain their adrenaline for another two and a half weeks and change the narrative of their performance at home.

“If you’re out of it, then it takes a toll on you because you start to just go through the motions,” Stewart said. “But being in it every day takes a lot out of you as well, but it makes it interesting and keeps everyone together. It’s been fun. You don’t know how exciting it’s going to get.”