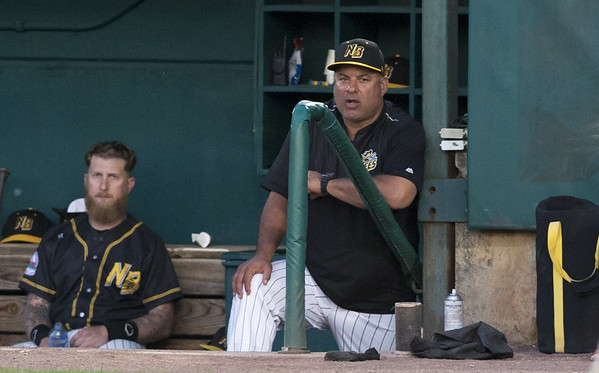 NEW BRITAIN - The New Britain Bees were scheduled to begin a crucial home stand on Monday afternoon against the Somerset Patriots, but Mother Nature had other ideas.

Monday’s contest was postponed due to heavy rain in the forecast and rescheduled for Tuesday at 5:35 p.m., which is now the beginning of a back-to-back double header, which will conclude on Tuesday night. Both games will be seven innings.

The Bees announced the postponement just before the originally scheduled first pitch time of 1:35 p.m. The rain began to pick up once the lingering fans made their way to the exits at New Britain Stadium.

New Britain, still in the thick of the postseason race, will have to gear up for a twin bill on Tuesday, though the team is confident the postponement will help the Bees after a seven-game road trip concluded on Sunday, giving the team no days off until the surprise day of rest on Monday.

“We’ll see how it turns out tomorrow, but I think this day is really going to help us,” Bees hitting coach Chuck Stewart said. “Traveling from North Carolina and then all the way to Lancaster was tough, and we didn’t play well in that double header when we got to Lancaster, but I think tomorrow will be different, and our arms will have another day of rest.”

The Bees were swept in Friday’s double header against the Lancaster Barnstormers, who own the worst overall record in the Atlantic League, and so far this season, New Britain has swept only one double header (back in May against the York Revolution) this season. The sweep at the hands of the Barnstormers was the third time this season the Bees have dropped both ends of a double header, but for New Britain, the key for playing two games in one day is rest, and it’ll have that thanks to Monday’s weather.

“The team will be a little more rested for this double header,” Stewart said. “We’ve been on the road for a week and all that travel, so after a day off, I hope we’re ready for both games tomorrow.”

For Stewart and the Bees, Tuesday’s double header is as much about a potential future playoff spot as it is correcting the disappointment of last week’s sweep to Lancaster, when a walk-off by the Barnstormers in game two put New Britain in an immediate 0-2 hole in the four-game set. The Bees managed to take the next two and split the series, but with a five-game deficit in the Liberty Division, the team knows it needs to do more than just break even.

“It was tough,” Stewart said of the pair of losses on Friday. “You’d love to sweep a series, but if you can win one of two, that was what we were trying to accomplish. To lose that second game in the bottom of the seventh was tough, because we thought we had things lined up to win that game. Winning three of four would have made that road trip even more special.”

The road trip was still a success thanks to a series win against the High Point Rockers, but time is also running out on the regular season, and the Bees still have ground to make up. The Patriots have hit a wall in the second half of the season, sitting at 19-31 and in last place in the Liberty Division. New Britain knows that with three weeks left in the regular season, if it is to complete this comeback and clinch its first-ever postseason appearance, it has to start with Tuesday’s double header against Somerset.

“We have to win series,” Stewart said. “Two of three, three of four each time, or sweeping. This is a huge series. It’s really make-or-break.”