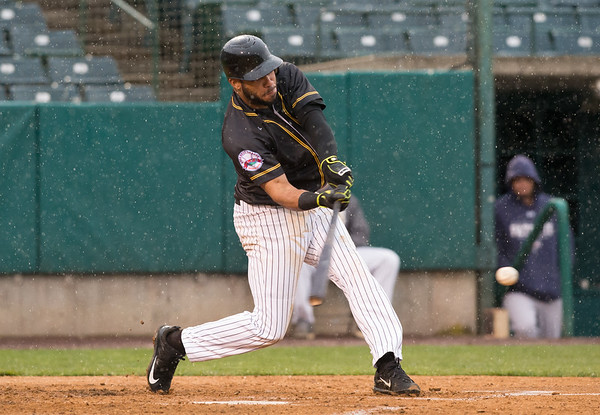 NEW BRITAIN - Voting is officially open for the Atlantic League All-Star Game on July 10 at PeoplesBank Park (home of the York Revolution), and a number of New Britain Bees players are making claims to represent the Liberty Division.

Here are a few names to keep an eye on until voting concludes on June 30:

Rogers has put up solid numbers in his second season with the Bees, as his .408 on-base percentage currently ranks second in the Atlantic League. His 29 walks are also among the league leaders, and that mark looks even more impressive when compared to his 16 strikeouts.

New Britain first baseman, however, finds himself on the ballot with David Washington of the Long Island Ducks, who has emerged as one of the best power hitters in the league. Washington has hit a league-high 15 home runs so far and driven in 35 runs to go along with a slash line of .288/.377/.669. It will be awfully tough for Rogers to receive more votes than Washington given those numbers, but he could finish in second among first basemen.

Amarista’s seven home runs leads all other shortstops on the Liberty Division ballot, and recency bias could help him receive more votes given the 15-game hitting streak he held through last Wednesday night. That hitting streak helped Amarista crack the .300 mark (.301), and his .511 slugging percentage is certainly All-Star material.

The other two Bees outfielders on the ballot are Bijan Rademacher and Darren Ford, both of whom who struggled out of the gate to start the season. De Aza might be the only hope to represent the Bees in the outfield grass, and luckily, he has a very strong case.

De Aza’s .921 OPS and his .397 OBP rank near the top of the Atlantic League. Washington leads the league in OPS at 1.046 entering Tuesday, but has struck out more than twice as much as De Aza, making the Bees infielders’ numbers even more impressive and All-Star worthy. It also helps that De Aza ranks third in the league in average at .340.

Galvez should be one of the safest bets to represent the Bees in the Atlantic League Midsummer Classic. The slugger ranks third in the league in OPS (.957) and slugging percentage (.594), while also maintaining a batting average of .326, which is good for fifth in the league. His six home runs are pedestrian compared to other potential All-Stars, but the rest of his numbers more than make up for that. He should be heading to York come July.

Fuller finds his way on the ballot, and it is very much deserved. The reliever entered Tuesday with a 1.17 ERA, and in one of his first tastes of the closer role, picked up a save in a flawless inning against the Rockers that included two strikeouts. He currently has three on the season to go along with 17 strikeouts to just four walks and a 0.78 WHIP.

Other New Britain pitchers on the ballot include Michael Johnson, Rainy Lara and Cory Riordan, but Fuller may have the strongest case among the Bees pitching staff.