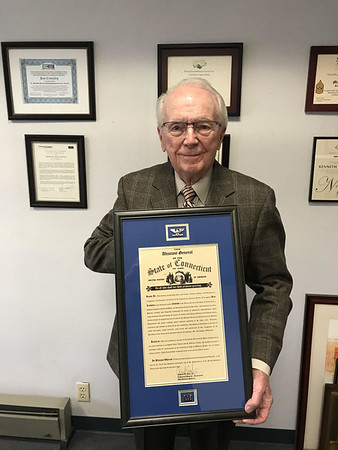 BRISTOL - Ken Crowley, owner of Crowley Auto Group, has been named an honorary colonel in the Connecticut National Guard for his 18 years of supporting “Operation Elf” - a state initiative that raises money for the National Guard Foundation and collects Christmas presents for children of military families.

Crowley received the surprise honor during an event at the Hartford Armory Saturday, Dec. 14, where he was joined by Lt. Governor Susan Bysiewicz and 250 military families.

“It blew me away,” said Crowley. “It was quite impressive; they were really appreciative of what we did. It even made some of the women cry because they needed the help so bad. The National Guard Foundation exists to help soldiers and their families who often come to them when they are in bad shape. Many soldiers may be suffering from the scars of battle. The Foundation is not funded; they are supported strictly by donations. Last year they ran out of funds so what we were able to do was very meaningful for them.”

Crowley has been a supporter of Operation Elf for 18 years, since it was introduced by then-Governor Jodi Rell. This year, he began collecting Nov. 1. He praised his employees, who he said were “absolutely fantastic” in “giving of themselves” and making the collection a success. He also thanked DATTCO, whose employees also assisted with the collection. With their combined efforts, Crowley presented $19,500 in cash and gift cards to support the National Guard Foundation. Numerous presents were laid out at the Bristol Armory for children to pick out as gifts.

“One wall was lined with a lot of two-wheel bicycles that slowly decreased in size followed by a line of tricycles,” he said. “Then, after that, there were several counters laid out with gifts that kids could pick out that were separated by age range. The children were also fed with hamburgers, hot dogs and chili and ice cream. The military band was there and they did a great job.”

“About a month ago, prior to Thanksgiving, we also held a charity for the National Guard Foundation at our auto show at Mohegan Sun,” said Crowley. “People don’t realize that car dealers are a very generous group of businessmen. Oftentimes, when people have trouble, they come to their local car dealer and find help. Dealers are always looking for ways that they can help.”

Crowley recalled another story of how he was able to help out military families in the past.

“There was one time that the troops were being deployed to a war zone,” he said. “Things were very difficult and the war was raging. It was a couple days before Christmas and they were sent to the military base in Indiana. There was no way that they were going to figure out how to get home for Christmas in time. But, we businessmen banded together to send buses that brought them to their homes for Christmas. Then, we brought them back because they had to be back in Indiana the next day.”