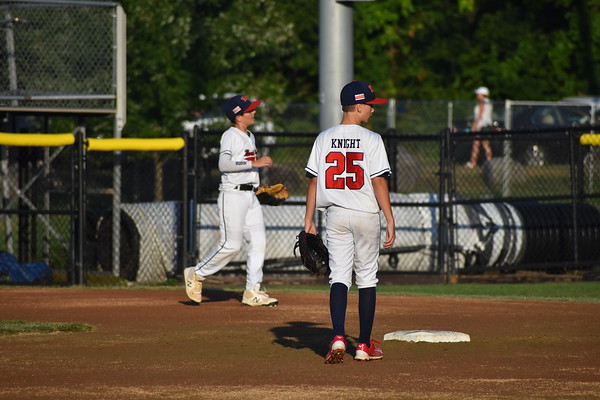 BRISTOL – The champions out of Northwest Washington Little League of Washington, D.C. found themselves down early in Monday’s nightcap when the Maryland state champs, Conococheague Little League, plated eight batters in the opening frame. Four runs through the first three innings for Maryland, however, weren’t nearly enough to slow down D.C. and stave off elimination.

The game was delayed by more than two hours after about three and a half hours of total delays in the afternoon bout between New York and Connecticut. Northwest Washington manager Ricky Davenport noted that the delay might have affected his team early in the contest.

“They kind of lost their five o’clock ready to play mode, so it took a couple innings to get it back, but they’re resilient, man, they fight,” Davenport said. “I love these kids.”

Northwest Washington went on to win by a score of 12-5. An offensive onslaught in the third inning ended with their first six runs of the game and they weren’t done there. After batting around in the third, D.C. went on to add six more runs over the next two innings to cement their lead as well as a spot in the Mid-Atlantic semifinals.

Perhaps the biggest hit of the night came from centerfielder Devin Trendl in the fourth inning. Trendl stepped in after Dylan Higginbotham reached by way of a walk, but he wasn’t on first base for long. Trendl smoked a ball deep into the right-center gap where it found plenty of room to roll. The center fielder coasted into third with an RBI and later scored on a wild pitch.

Off the bat, Trendl wasn’t sure if the ball had enough juice to leave the park, but he did take note of how the defense was lined up and took advantage of it.

“When I hit the ball, I was thinking there might be a chance it could go out, but when I realized the outfielders were playing pretty far in and it could get down I just started sprinting around the bases,” Trendl said.

Trendl and Higginbotham both reach base and scored three different times – the only District members to do so. Those two runs scored in the fourth inning helped break things open for the eventual winners.

Maryland becomes the first team eliminated from the Mid-Atlantic bracket after losses to Delaware and D.C.

Northwest Washington now awaits the loser of Pennsylvania and Delaware’s matchup on Tuesday at 7 p.m. The elimination bracket semifinal will be played on Thursday at 1 p.m. on ESPN.