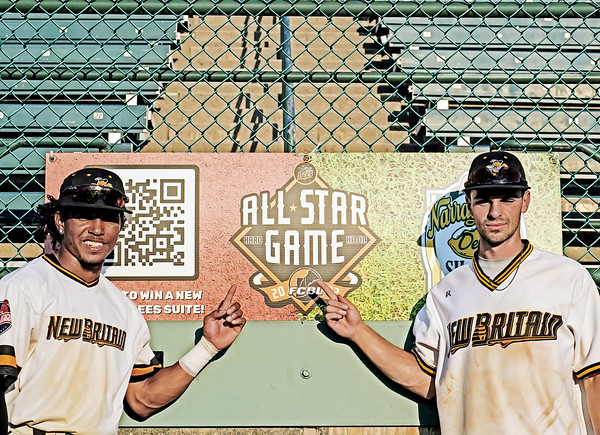 NEW BRITAIN – For the second straight season New Britain has been named as the host site for the Futures Collegiate Baseball League All-Star Game. The game is set to be played on Tuesday July 26 at 7 p.m. at the conclusion of the home run derby which will begin at 5 p.m.

“New Britain Stadium offers everything we need for a successful All-Star Game,” said FCBL Commissioner Joe Paolucci. “It is one of the better facilities in all of New England.  [Bees’ owner] Brad Smith, [general manager] Bret DeRosa and the entire Bees organization did an outstanding job in [2021] and they expressed interest again this offseason in hosting.”

The New Britain Bees will have even more representation at this year’s midsummer classic in addition to hosting the event, however.

Bees’ center fielder Joel Lara was named as a captain to draft one of the teams from the pool of remaining all-stars. Relief pitcher George Goldstein of the Vermont Lake Monsters was named as the other captain and will oppose Lara.

This is the first season in which the FCBL has gone with the draft-style format for their all-star game, following suit with the NFL and NBA which have each tried this system. Paolucci said the league is always looking for way to spice up their events. He noted that they considered the idea of an online selection show to reveal the all-stars, but ultimately went with the draft format.

“It’s an amazing feeling,” said Lara. “I’m truly honored to be a captain for the all-star game this year. It’s been three years and it’s my first time being an all-star. I want to thank the league, my coaches here and the New Britain Bees for this opportunity.”

Lara’s 42 stolen bags have already eclipsed the previous single-season league record of 39 by Aaron Wilson as a member of the defunct Old Orchard Beach Raging Tide. With 15 games to go in the season, Lara’s pace of about 1.11 swiped bags per game has put him within reach to reset the record to potentially 60 bases in one season.

Goldstein could also make history this season and surpass the previous record of 26 appearances by a pitcher. Fellow Lake Monster Wyatt Cameron tied the record last season set by Speros Verinos in 2015 of the North Shore Navigators – now members of the NECBL.

The commissioner noted how it worked out well having the two captains represent the host city and the first-place team in the league.

With the exception of the draft, the process of the coaches selecting the pool of all-stars and home run derby participants has remained the same this season.

“We have multiple meetings with [the coaches] prior to their votes,” said Paolucci. “I’m very confident that we made the right choices.  Although every year there are some tough omissions.”

Each captain was responsible for drafting two catchers, two first basemen, six other infielders, six outfielders and 10 pitchers. For Lara’s team, it’s easy to see where the speedster found his strategy heading into Tuesday’s draft.

“I wanted to put together the best team possible with a fast outfield and great bats,” Lara explained. “I think I came out with the better team. We’re feeling confident heading into the game.”

Lara was able to nab some of the league’s best hitters in Tuesday’s draft. Three of the league’s five best batting averages will reside in the home dugout on Tuesday with fellow Bee Teddy Schoenfeld, first baseman/outfielder Gavin Noriega and outfielder Andy Martin. The Bees’ outfielder was able to add 33 RBI to his club by way of D’Angelo Ortiz of the Brockton Rox – currently second-most in the FCBL.

The home captain came away with each of the eight other Bees all-stars headlined by relief pitcher Benny Wilson, infielder Tyler Pettorini and outfielder Mike Torniero among others.

The pitching staff features most notably Izaiya Mestre and Tim Cianciolo of the Pittsfield Suns, Tim Noone – the only Lake Monster not rostered by Goldstein – and John Kiss of the Bees.

Speed looks like it will be the headlining skillset of Team Lara when the 2022 FCBL All-Star Game kicks off at 7 p.m. from New Britain Stadium on Tuesday.