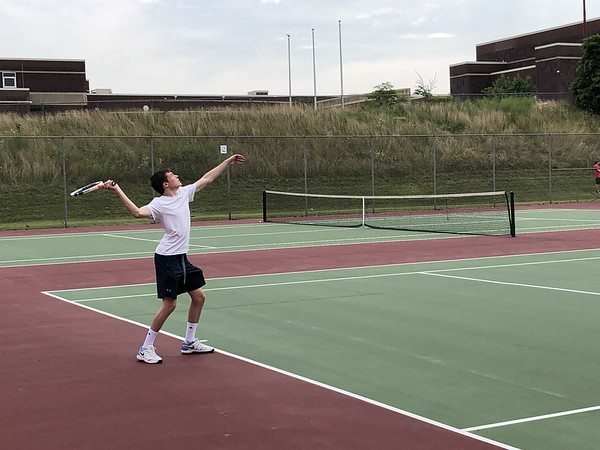 Matt Samarotto eyes his serve over the weekend. | Contributed Buy this photo
Published on Tuesday, 10 August 2021 20:26
Written by TYLER HETU

The 43rd Children‚Äôs Charities Tennis Classic kicked off this past weekend with 80 players from across the region coming to play for tennis charity.

The event, held at New Britain High School‚Äôs tennis courts and Newington‚Äôs Tennis Center, helped raise approximately $7,000 for the Hospital for Special Care's Pediatric Autism Unit through its Harper Autism Fund. The final total is to be announced in the following weeks.

Don Lukowski, the chairman and founder of the event, said the tournament exceeded expectations this year.

‚ÄúI never fathomed or thought (about how big the event would get). You just took it year-by-year and kept doing it,‚Äù said Lukowski. ‚Äú‚Ä¶ Now we have all these sponsor levels and donors, and I‚Äôm so grateful for them because they‚Äôve donated a lot to the tournament with the entry fees for those who‚Äôve played. I‚Äôm so fortunate that all the expenses are picked up and paid for, so any money goes all to the hospital.‚Äù

The tournament started as a way for Lukowski to get others together for some fun, but rapidly grew into something more once he realized there was an opportunity to play for more than just bragging rights between friends.

‚ÄúAs it grew and we had more people coming in, I thought we should do this for a purpose,‚Äù said Lukowski. The tournament started to gain popularity through the 80‚Äôs, and has since donated ‚Äúa lot‚Äù of money to local hospitals and resource centers.

‚Äú‚Ä¶ I wanted to have a tournament, and when it did it with the kids in the beginning it was about having fun,‚Äù said Lukowski. ‚Äú‚Ä¶I wanted to have an event that was fun where the kids would come and enjoy it and relax. Then it grew into a tournament where kids and play and help out other kids, who are not as fortunate.‚Äù

The decision to play for a cause helped grow the tournament to new heights with all proceeds going directly to the hospital. With it being a charity tournament the level of skill has not been low, with 80 players across 11 different divisions allowing for anyone able and ready. Former amateurs and Div. I talent have played, along with family duos.

Lukowski pointed towards the Hovorka family, who won the family doubles match, as a perfect example of what kind of player is attracted to the event. Lucas, father of his doubles partner Ryan, was a No. 3 singles play for USC before professionally playing for the ATP.

With players of all levels able to play in the expanding field, new additions to the tournament this year included added divisions and chances for adults to play.

‚ÄúI‚Äôm so grateful for what (the committee does) to make this happen,‚Äù said Lukowski. ‚ÄúThey gave me the suggestions and the ideas, and one of the big things they came up with this year was to expand the divisions to give players of all abilities the opportunities to play. ‚Ä¶ Not only the high end player, but the recreational player would have a chance to play and compete at their level. We also added adults.‚Äù

Looking ahead to next year Lukowski isn‚Äôt entirely sure about what will be added to make the tournament better, but is expecting for a 44th annual tournament where participants can have fun and donate for a local cause.

‚ÄúWe‚Äôre just trying to wrap up this year, right now,‚Äù said Lukowski. ‚ÄúWe‚Äôve got a few thoughts we‚Äôre thinking about and we‚Äôre going to get together and see what went well. ‚Ä¶ I just want to give everyone an opportunity to play and have fun. Whatever good we can do, we do. It‚Äôs all about the people.‚Äù

In boys singles play, Nikhil Vishwanath of Newington defeated marc Pantano in an 8-1 score to take the A division. Sean Fleming of Newington won the boys B division, winning 8-4 over Matt Samarotto.

The girls singles, also split into A and B divisions, saw Anusha Singh of Newington win 10-8 over Newington‚Äôs Emilia Dugas. In the B bracket, Hermoine Cordeiro of East Hartford bested Rebecca Fisher of Newington in a 10-9 score, which had a 10-8 tie breaker go in Cordeiro‚Äôs favor.

In the men‚Äôs B singles Alim Rodicon of Willimantic defeated Adris Reba of Willimantic in a 10-4 score. The men‚Äôs A finals are to be completed Tuesday night between Dr. Ben Doolittle of Berlin and Hubert Bis of Newington.

The Grand Masters singles title went to Alex Roy of Southington, who defeated Rhoan Kataria of Southington in a 6-4 and 3-6 game, winning 11-9 on tie breakers.

In family doubles, Lucas and Ryan Hovorka of Avon won in an 8-1 score ovr Tim and Ryan Davis of Newington

Bis and David Gates will take on Sean and Tyler Hussey in the adult open doubles final Wednesday evening.

In the 18 and under doubles division, Aiden Limm of Middletown and Abby Weaver of Southington won 8-2 over Nikil and Niha Vishwanath of Newington.