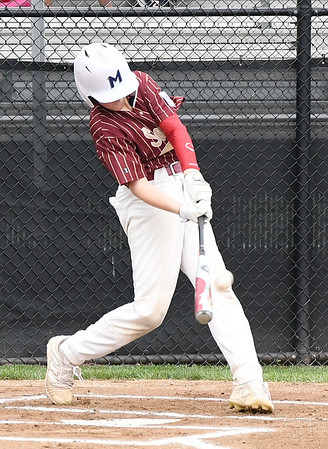 With the game tied 3-3 after two innings, Maine posted 18 unanswered runs over the ensuing three frames to inflict the mercy rule and win 21-3 after five innings. Shortstop Noah Fullerton led the way with four hits and five RBI and was one of two players on his team with four hits. Maine finished the day with 17 hits and 11 walks while Rhode Island notched three runs off of seven hits.

Maine starting pitcher Colton Cross recorded all but the final two outs of the game, striking out five and allowing six hits and three earned runs early before locking down in the later innings. Maine will return to the field Wednesday to face the winner of Vermont and New Hampshire while Rhode Island’s season is finished after losing both of its games in Bristol. North Providence ends its year with a 9-3 postseason record.

Brody Hadiaris broke the 3-3 tie in the top of the third inning with a two-out pinch-hit single that scored Cross from third base. After a scoreless bottom half, Maine returned to the plate and erupted for six runs in the fourth frame to continue the 18-run streak that did not feature any extra-base hits. Five of Maine’s runs in the inning were earned and saw RBI from Fullerton, Cross, Owen Thompson’s walk and a two-RBI single from catcher Ryan Gagnon, whose two-out hit came in the same inning he made the first out.

Maine was far from done, however, as it plastered 11 more runs on the scoreboard in the top of the fifth and the first nine runs coming before an out was recorded. Two runs came from walks along with one hit-by-pitch and Thompson, Connor Penney and Brennan Tabor each picked up two-RBI singles. Hadiaris and Fullerton also had RBI singles in the fifth, building an insurmountable lead for Rhode Island to breach.

The contest started at a different pace, as both teams scored in the first inning and displayed power from the hearts of their lineups.

Shortstop Noah Fullerton started the scoring right away for Maine with a three-run home run in the top of the first, scoring Quinn Cook and Brennan Tabor. Rhode Island answered back in the bottom of the inning when first baseman Tyler Oliver went deep with one runner on base to make the score 3-2.

Rhode Island evened the score in the following inning with a single from shortstop Nick Natale that scored third baseman Vincent DeLisi from third.