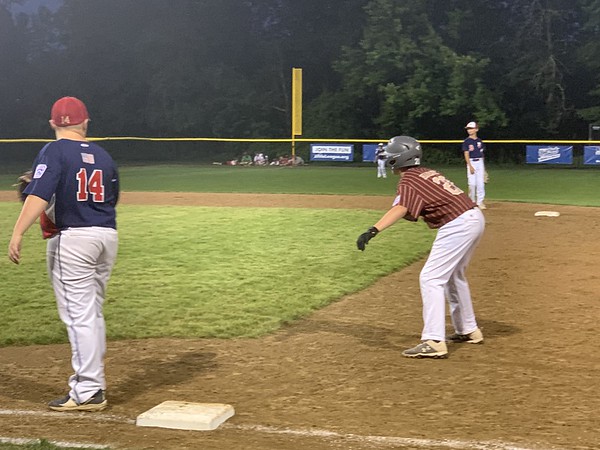 Brody Hadiaris of Maine leads off first base during the fifth inning of Maine's 3-0 loss to Massachusetts. | Matt Hornick | Staff Buy this photo

Cullen Pasterick of Massachusetts pitches during the fifth inning of his complete-game shutout of Maine. | Matt Hornick Buy this photo

BRISTOL - Peabody West Little League from Massachusetts needed only three hits Monday to get past Saco/Dayton Little League of Maine in its opening game of the New England Regional Tournament.

Massachusetts’ three hits yielded three runs, which was all it needed in its 3-0 shutout of Maine. Shortstop Jimmy DiCarlo earned two of his team’s hits and drove in its first two runs as well with a double in the second inning. Pitcher Cullen Pasterick went the distance for Massachusetts, striking out four batters and not allowing any runs despite putting seven runners on base.

Maine starter Brennan Tabor, finished with eight strikeouts over four and a third innings before reaching his pitch limit.

Massachusetts will face Manchester Little League from Connecticut on Thursday for a spot in the regional final while Maine will take on North Providence Little League of Rhode Island on Tuesday at 1 p.m. The losing team between Main and Rhode Island will be eliminated from the tournament.

Tabor opened the top of the second inning with two strikeout and two walks, but failed to escape the inning cleanly as DiCarlo scored both baserunners with a double into the left-centerfield gap. DiCarlo had his team’s first two hits and RBI on the day after entering its second rotation through the batting order.

Third baseman Brendan Koibierski added another run to Massachusetts’ lead with a solo home run over the centerfield fence on the first pitch of his at bat. Massachusetts scored three runs on three hits after three innings while Maine was unable to score in that time with the same number of hits.

Maine threatened with two outs in the bottom of the third when centerfielder Quinn Cook tripled for his first hit of the day. Unfortunately for Main, Tabor, the next batter, grounded out to end the inning without getting the runner home.

Monday’s game was Massachusetts first of the tournament after receiving a bye through day one, while Maine reached this contest with a 5-0 win over New Hampshire on Sunday. Tabor had two hits and two RBI in that contest in addition to two hits from catcher Ryan Gagnon. Noah Fullerton recorded 12 strikeouts from the mound in five and one third innings before Tabor took over for the final two outs.