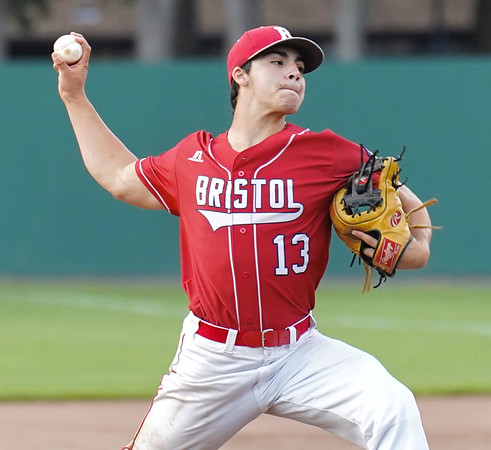 BRISTOL - Reaching the state championship game for American Legion baseball in Connecticut requires winning four games in as many days and the Bristol Legion team is already a quarter of the way there after its 9-2 win over South Windsor on Tuesday night.

Playing so many days consecutively is not part of the regular season for these teams and the following of pitch counts and innings limits make this especially difficult for teams even, especially teams that are thin on pitching.

Bristol jumped out to a 5-0 lead after one inning against South Windsor, easing the pressure of everyone on the team for the rest of the game, specifically starting pitcher Andrew Lozier. The Bristol Eastern graduate hurled five and a third scoreless innings and allowed three hits with six strikeouts. Not facing much danger yet, head coach Jerry LaPenta removed Lozier from the game, not only to get a fresh arm on the mound, but ensure Lozier’s eligibility to pitch later in the tournament run.

“I thought Lozier pitched well,” LaPenta said. “I was a little nervous about making the move, but he was at 79 pitches, so if I don’t take him out there he can’t pitch again. So now if we make it to the championship game he’ll be available. I usually don’t like doing that because I feel worse if it backfires than if I just let him go. The guys came in and did a good job, I thought Tyler Martin came in and threw well.”

LaPenta expressed he is a “baseball superstitious guy” and very much believes in the karma of these decisions, but understands the circumstances under which he is coaching. He may not have wanted to remove Lozier when he did, but leading 7-0 at the time gave him enough comfort to recognize the big picture about how to make a serious postseason run.

“Everybody has to step up,” LaPenta said. “That’s why I made some of the pitching moves I did, trying to keep guys available to pitch. It’s a little different scenario than a normal type of playoff where you get a day or two off, but it’s the same for everybody so everybody is in the same boat. Hopefully we can keep it rolling.”

Bristol should feel comfortable making moves of that type if the offense continues its success. Bristol posted nine runs on 14 hits with eight of the team’s starters getting at least one hit and four players finishing with at least two hits. The bats repeatedly delivered during the game and immediately negated the two runs South Windsor scored in the top of the sixth inning by scoring two back in the bottom of the frame.

Bristol’s next round matchup is with Tri-Town and the team will look to keep its season alive while remaining in a position to play well in ensuing games. LaPenta had his players active on the basepaths Tuesday night, as he has all season, which he feels is one of the most efficient ways to stimulate the offense.