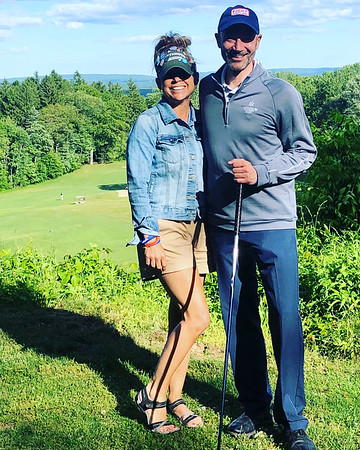 March is Colorectal Cancer Awareness Month, an important time of year for Wolcott residents Mike Mancini and Carole Motycka. Both survivors of colorectal cancer, the couple is always very active this month, as well as the rest of the year, but have a special opportunity this year.

They will be attending the Cologuard Classic golf tournament in Tuscon, Arizona for the second year in a row and Mancini will be one of three survivors playing in the event’s pro-am Thursday. Mancini went to the tournament last year as an ambassador through his involvement with the organization Fight Colorectal Cancer and this year will be one of three Fight CRC survivors to play alongside professional golfers while Motycka will be joining him as an ambassador and his caddie.

Mancini said he put his name out there as soon as he heard about the opportunity.

“I’ve been an avid golfer since I was 12, I was the captain of my high school golf team, I used to play in a men’s league, I love to play golf,” Mancini said. “So I of course raised my hand.”

Mancini will be paired with three-time PGA Tour winner Jerry Kelly for the pro-am and will also be hitting the opening tee shot to kick off the professional tournament over the weekend. As one of the featured survivors, Mancini will be sharing the story of his battle with colorectal cancer before the start of the round.

“For me, [the coolest thing] is going to be being on the inside of the ropes with the pros, getting to see how they are,” Mancini said. “As a kid I went to the Travelers Championship, back then it was the GHO, but you watch that from an observer’s perspective. To be able to be on the inside of the ropes and hear him talk with his caddy, watch how they interact with each other. I think we’re even going to have a meet and greet or a dinner with Jerry, so just to get to know them on a personal level is just something that not too many golf fans get.”

Excited for this opportunity, Mancini and Motycka both emphasized how competitive he is and that he will not make light of his time on the course. He said he once threw out a pitch at a Hartford Yardgoats game for a cancer awareness night and spent the previous month practicing pitching from a mound to ensure he wouldn’t bounce the pitch before it reached home plate.

“I’m very competitive,” Mancini said. “I love having this opportunity, but at the same time, through all surgeries I’ve had and all the strength and muscle that I’ve lost from all the chemotherapy, I’m kind of relearning my golf swing, I can’t hit the ball nearly as far as I used to. So my game is definitely diminished from where I was before I got cancer, so being [as competitive as] I am, it’s going to be a little frustrating that I can’t play as well as I would like to, but still just to have the opportunity, it’s a once in a lifetime opportunity, I just couldn’t pass that up.”

Everyone playing in the tournament is playing on behalf of a colorectal cancer survivor, patient or caregiver and will wear a ribbon with that person’s name on it for all three rounds. Each hole on the course will also feature the story of a survivor.

“Just the excitement of getting to experience it with Michael, to have just such a memorable time for us to spend together in the space of advocacy that is really a predominant part of our relationship and who we represent. To be able to be on that bigger stage to speak to people about what colorectal cancer looks like, because Michael and I are both very healthy, you wouldn’t know we had cancer if we didn’t tell you, which is one of the tricky parts about colorectal cancer, it happens to people who are unsuspecting. To be able to raise that awareness is something I’m looking very much forward to.”

While there are serious reasons for this trip, Mancini and Motycka will certainly not let that stop them from enjoying themselves. Getting to be on the course together, they will make sure to take advantage of this rare experience.

“I think about the kids today on tour like Jordan Speith and Justin Thomas and Rickey Fowler, when I was a young teenager I would go and see Tom Lehman, Mark Calcavecchia, Jerry Kelly, those are the guys I grew up watching, this is just a tremendous opportunity and for somebody who loves to play golf,” Mancini said. “As a kid you dream of being a professional athlete, when I was on the high school golf team I always wanted to be a PGA golfer and this will be the closest thing I get to that experience.”