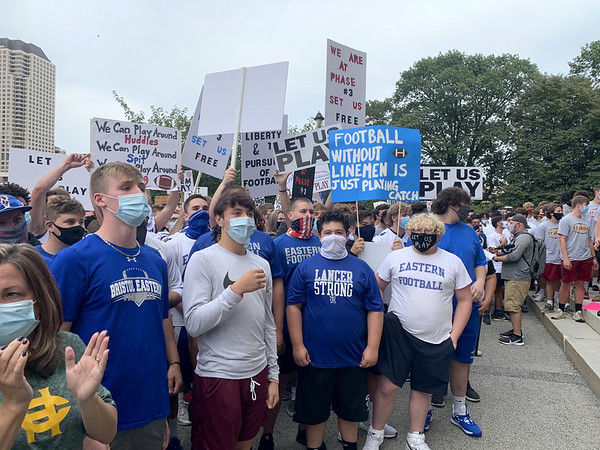 Bristol Eastern football players at the protesting at the capitol building in Hartford. | Matt Hornick | Staff Buy this photo
Published on Friday, 11 September 2020 11:21
Written by

HARTFORD - Connecticut Gov. Ned Lamont called a huddle Friday with health officials and the organization overseeing high school sports in the state to discuss whether it might be possible to hold a high school football season this fall.

The Connecticut Interscholastic Athletic Conference cancelled the season a week ago, saying it had become clear the state Department of Health would not give its blessing to what it considered a high-risk activity for the transmission of the virus that causes COVID-19.

That led to protests, including one on Wednesday that drew about 1,000 athletes, coaches and parents to Hartford.

They argue that Connecticut's COVID-19 metrics, which include one of the lowest infection rates in the nation, indicate that is safe to hold football with safety protocols in place.

The governor called the meeting, which is planned for 9:30 a.m. to allow the CIAC to make its case for holding games, either in October or in the spring.

High school football has been moved to the spring in nearby states, including New York, Massachusetts, Maine and Rhode Island.