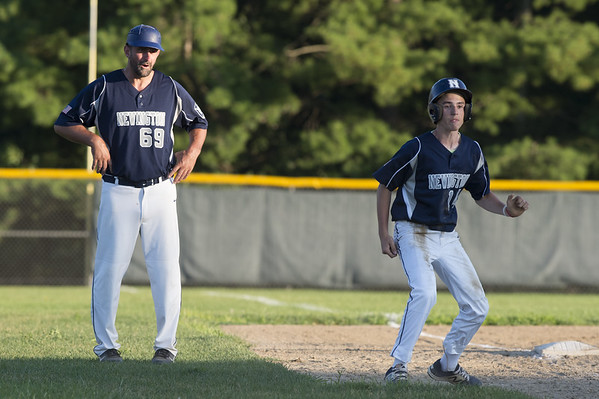 NEWINGTON - The Newington and West Hartford CTEBA teams battled through five lead changes in a span of three innings on Monday evening, but the final scoring change belonged to West Hartford.

West Hartford pushed across three runs in the sixth to send Newington into its final regular season game on Wednesday with a 7-6 loss.

West Hartford held an 11-6 advantage after a four-run seventh before the game was called due to darkness, reverting the score back to the 7-6 tally following the last completed inning.

Newington, winners of two in a row heading into Monday’s matchup, relinquished its lead after West Hartford used three walks and a two-run single from Joe Dooley to turn a 6-5 deficit into a 7-6 lead and beat Newington for the third time in as many tries this season.

The Newington pitching staff issued 13 walks on the day, including a pair of intentional walks, and nearly overcame it with timely hits from Dom Bukowski and Nick Dicioiccio, but fell one rally short.

“Too many walks,” Newington coach Jack Hurley said. “But we hit the ball today. We have a young team and we had too many walks and a few wild pitches, but overall, we had a good game.”

Dicioccio, Newington’s starter, allowed his first hit of the game in the fourth when Tucker Redden laced a one-out double into the gap in right center, and Dicioccio looked poised to escape another jam when he forced a grounder to third with two out, but Gunnar Johnson’s throw sailed over the head of first baseman Sean Hurley, allowing Redden to score to give West Hartford a 1-0 lead.

West Hartford gave Newington a chance to tie in the bottom of the fourth, letting Daniel Crouse reach on a throwing error to lead off the inning and after a lineout by Gunnar Johnson, West Hartford appeared to have a potential double play ball. But a hustling Crouse forced Cole Kocienda to second-guess the double play, and hurried a flip towards a vacant second base, allowing both runners to advance safely. After Bukowski popped out to first, Dicioccio laced a liner down the third base line, which was ruled fair by the home plate umpire, who was positioned behind the pitcher’s mound due to the new health regulations. West Hartford protested the call in unison while the ball rolled into the left field corner, allowing both runs to score. Redden came home with the throw from left field, which sailed over the head of catcher Liam Stone, allowing Dicioccio to come all the way around to score thanks to a triple and an error, putting Newington ahead 3-1.

“It looked fair, Dicioccio said. “It felt good to pick myself [up] and feel more confident.”

Dicioccio, however, struggled to hold his two-run lead in the fifth, walking the first two batters before he was pulled for Ryan Saindon, having pitched four-plus innings, allowing just one hit but walking six. Brennan, who had struck out twice against Dicioccio, greeted Saindon with an RBI double to right center to pull West Hartford within one, and an infield grounder by Joe Dooley that pinballed around the left side of the infield allowed another two runs to score to put West Hartford ahead.

West Hartford’s lead was short lived, as Newington came alive in the bottom of the fifth when back-to-back singles by Saindon and Crouse and a walk to Johnson loaded the bases for Bukowski, who ripped a bases-clearing double into the gap in right center to quickly turn a 4-3 deficit into a 6-4 lead.

Saindon got two quick outs in the sixth before a pair of walks in between a wild pitch put runners at the corners, prompting DeBlasio to bring in Sam Dionne in relief. Dionne fell behind Brennan 3-0 and ball four bounced in front of the plate and skipped to the backstop, allowing a run to score to make it 6-5 Newington. After an intentional walk to Tim Cotter, Dooley snuck a line drive over third to score two and give the lead back to West Hartford.

Newington put the tying run in scoring position in the sixth, but Michael Zawisza struck out looking on a borderline pitch to keep West Hartford ahead.

West Hartford added four more in the seventh, one on Brennan’s second extra-base hit of the day, to put the game out of reach, though the score reverted back to where it was in the last inning.

“It’s definitely tough,” Dicioccio said. “I would have loved to finish this game.”