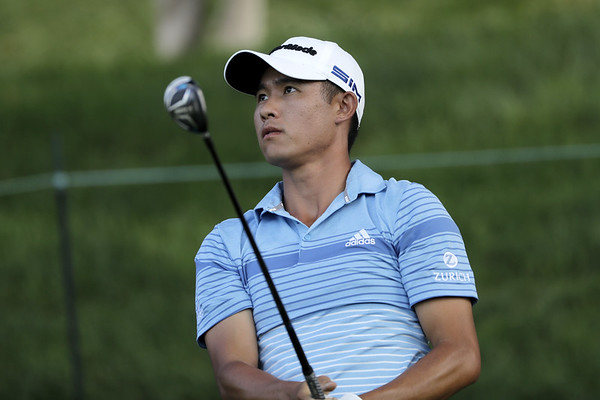 Collin Morikawa watches his tee shot on the 17th hole during the first round of the Travelers Championship golf tournament at TPC River Highlands, Thursday, June 25, 2020, in Cromwell. | AP Buy this photo
Published on Friday, 26 June 2020 14:53
Written by RYAN CHICHESTER

CROMWELL – Success has seemed to follow Collin Morikawa around since he began his pro career on the PGA Tour.

At just 23 years old, Morikawa won the Barracuda Championship last year, tied for second at the 3M Open, and earlier this year, came in second and just missed a second career Tour win at the Charles Schwab Challenge.

With a short but impressive resume, Morikawa was hoping to compete into the weekend at the Travelers Championship, but instead, he will be facing an unfamiliar early exit.

Morikawa struggled on day two of the Travelers, shooting 1-over par after finishing 2-over on Thursday. At 3-over par after 36 holes, Morikawa will miss the cut for the first time in his young pro career.

“I had a tough week last week, and coming into this week everything felt good, and just couldn't get the ball in the hole,” Morikawa said. “That's the name of the game, right?”

An early exit at the Travelers marks the end of a historic streak for Morikawa. Since beginning his pro career, the California native has made the cut in 22 straight PGA Tour events, the second-longest streak on the Tour over the past three decades. The longest? That would be Tiger Woods, who began his pro career by making 25 straight cuts, leaving Morikawa just short of passing a legend.

The next longest behind Morikawa was Hideki Matsuyama, who made the cut 13 times in a row.

“It was bound to happen at some point,” Morikawa said of his streak coming to an end. “Who knows when that was going to be, but now I guess we're going to stop talking about it and I can go and just go on to next week.”

Heading into Friday with a projected cut of 3-under par, Morikawa ran into immediate trouble when he double-bogeyed the 12th hole, but started to pull himself out with back-to-back birdies on 15 and 16. Another birdie on the second hole put Morikawa under par for the round, but after four straight pars, he picked up two bogeys in a row on seven and eight, putting him well behind the projected mark to make the cut and make it 23 straight.

Morikawa’s bid at history is over, but he still plans on taking something of value away from his struggles at TPC River Highlands.

Morikawa will skip next week’s events and the 3M Open, which he nearly won a year ago. After that brief break, he will be back and looking to start a new streak of made cuts. But his bid for 23 ends in Cromwell.