Three storylines to watch heading into the Travelers Championship 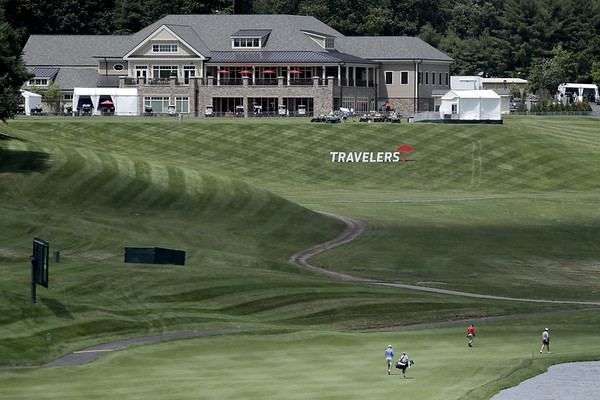 The clubhouse is visible during a practice round ahead of the Travelers Championship golf tournament at TPC River Highlands | AP Buy this photo
Published on Wednesday, 24 June 2020 21:16
Written by DAVID GLOVACH

CROMWELL - The 2020 Travelers Championship is set to begin on Thursday and there was plenty of news leading up to the tournament.

Here are three storylines to watch:

There was certainly a scare that the 2020 Travelers Championship wouldn’t be played after the PGA Tour learned there were three positive cases of the coronavirus cases on the eve of the tournament, leading to Tour Commissioner Jay Monahan flying to Connecticut to deliver a virtual press conference. Those cases also lead to some departures of some of the event’s biggest names. Golfer Cameron Champ was forced to withdraw after learning he has tested positive on Tuesday. Then Brooks Koepka, the fourth-ranked golfer in the world, and Graeme McDowell withdrew from the tournament after both of their caddies contracted the virus. Neither Koepka nor McDowell tested positive.

Koepka’s brother, Chase, who qualified Monday, also withdrew as a precaution, as did Webb Simpson, the world’s fifth ranked golfer. Simpson left after one of his family members tested positive for the coronavirus. But Monahan said the tournament was planning to go on and received a vote of confidence of continuing to play the event from Gov. Ned Lamot. It certainly led to a number of headlines with the tournament set to begin Thursday.

This is going to be something new for the Travelers Championship. The tournament has always been a big draw from not only Connecticut, but from most of the New England area, sine the event has a history of being able to bring in a number of the game’s biggest names and stars. But due to the coronavirus pandemic, the PGA Tour has announced the tournament will be a TV-only event, with no spectators permitted on-site. It will certainly be different seeing the players walk the course without a sea of fans lining the ropes to watch them play. The good news, if you want to call it that, for the players is they’ve already gotten a chance to play two tournaments without any fans or spectators in attendance. Most of the field played in the RBC Heritage tournament in South Carolina last week with the Charles Schwab Challenge being played the week before in Texas.

During these tournaments, select players have been mic’d up, which has provided some interesting tidbits for those watching at home. If that proves to be the case this week, it will add a nice little element to an event without fans.

The players and their caddies will have to follow a number of protocols set by the PGA Tour. On the course, players are expected to observe social distancing guidelines, refrain from shaking hands, high-fives and fist-bumps. They are also supposed to be the only ones to pull clubs, gloves, balls and tees from their bags. Caddies can handle the pins and bunker rakes, but must wipe each down after touching them. It will be interesting to see how this plays out on TV with the tournament being so close.

Despite the five departures from the Travelers Championship, there a number of top-tier golfers are set to take part in the tournament. Although there won’t be any fans, people will be able to watch 13 of the world’s top-20 golfers play the course at TPC River Highlands. Even for those who aren’t in the top 20, there are some names and former major winners who should get fans excited to watch golf.

In addition to Rory McIlroy (No. 1), Jon Rahm (No. 2), Justin Thomas (No. 3), Dustin Johnson (No. 6), Patrick Reed (No. 7), Patrick Cantlay (No. 9) and Xander Schauffle (No. 10), there’s fan-favorite Bubba Watson, who will be trying to win the tournament for the fourth time, defending champion Chez Reavie, Jordan Spieth and Phil Mickelson, who is back for the second straight year after taking a prolonged absence from playing in Connecticut. Overall, it should be exciting.