No. 1 Daniel Hand, No. 2 St. Joseph clash in Class L football title game with both program's going for a three-peat 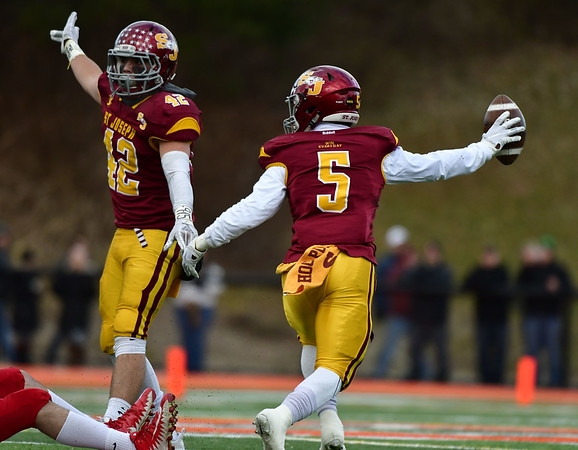 NEW BRITAIN - It’s a matchup of No. 1 and No. 2. Better yet, it might as well be called a matchup of champions.

Together the St. Joseph and Daniel Hand football programs have a combined 27 state championships - the Hogs have 14, the Tigers 13 - and this weekend, each will be looking to add another trophy to their respective cases.

St. Joseph, Class L’s top-seed and No. 2 team in Connecticut, and Daniel Hand, the No. 2 seed and No. 1 team in the state, will meet Saturday at Veterans Stadium in New Britain to decide the Class L state championship. It’s the first time the state’s top-two ranked teams will play against the other for a state title since 2005 when Xavier beat Southington 45-30. Kickoff is set for 3 p.m.

“It’s high school football,” Hogs head coach Joe Della Vecchia said. “It’s unique. It never gets old. It’s so much fun to be out there every day and then when you’re playing the last game of the season, it means you’ve had a successful year. You don’t ever want it to end.”

But this meeting will determine more than just the best team in Class L. Both St. Joseph (12-0) and Daniel Hand (12-0) will be looking to win their third straight championship.

The Hogs will be going for their third title in their third different classification after winning the Class S championship in 2017 and the Class M title over Berlin last season. They have won 22 straight games. The Tigers have won the past two Class L championships, beating Masuk in 2017 and topping Maloney, who they also beat in the semifinals this season, last year. Daniel Hand is also on a 36-game winning streak.

“It helps us a lot,” running back and receiver Jess Lutz said of the Tigers being in this situation before. “I remember going into our sophomore year when we were there and going, ‘Whoa. We’re here.’ It kind of gave us a little bit of surprise. Now, being here for third time and coming back at it, this is more of a business trip than anything else.”

That’s really the approach both teams are taking and they’ll have to with the amount of talent set to take the field.

Offensively for St. Joseph and Daniel Hand, it all starts with their quarterbacks.

And both have a number of weapons to throw to.

Shirden is a force all his own. The senior has rushed for 1,891 yards this season (9.7 ypc) with an eye-popping 33 touchdowns. In two playoff games, he’s found the end zone 11 times.

On the other side, Ethan Haberman (42, 8332, 13) is the Daniel Hand’s main receiving threat with Isaiah McNeilly (19, 259, 6) and Seth Sweitzer (15, 209, 3) rounding out the group. And the Tigers have a good running back of their own. Colin McCabe has rushed for 1,407 yards (11.6 ypc) and 20 touchdowns despite missing two games this season. Whether or not McCabe will suit up remains to be seen, left Monday’s semifinal in the third quarter with an apparent leg injury. But Lutz has proven himself to be a capable back in his stead. The senior has rushed for 628 yards and 10 touchdowns to go along with two receiving scores.

“We can’t get off to a slow start,” Tigers head coach Dave Mastroianni said. “We’ve been up and down with that [this season]. We can’t do that [on Saturday]. If we get off to a slow start against St. Joe’s, we’ll be chasing for the rest of the game and that’s really not our game. We have to be a complete team playing against a very complete team, so we have to be able to sustain what they give us and try to give it back to them as best as we can.”

It should be a good test for both defenses, which are going to have to play well on Saturday. Neither one of these units has seen an offense quite like the other, but both have tough to score against.

St. Joseph has only given up double-digit points three times this season and that was before the mid-season bye week. Wilton and New Canaan managed to each score 14 points, which is the most given up in a game by the Hogs this year. In its two playoff games, which happened to be against Wilton and New Canaan as well, St. Joseph has surrendered just seven total points, while scoring 91.

The Hogs’ defensive line of Mike Morrissey, Jermaine Williams and Cayden Porter has played together for three years and they free up linebackers Cole DaSilva (84 tackles, 18 TFL), Dennis Rotunno (54, 12.5) and Alex Pagliarini (91, 12). DaSilva and Morrissey lead the team in sacks with eight and 7.5 respectively, while four players are tied for the team lead in interceptions with three.

“They’re a very balanced team,” Morrissey said of the Tigers. “They can run it, they can pass it, they can do just about anything. So we have to step up on all factors and we have to do what we’ve been doing and do it to the best of our abilities.”

Daniel Hand’s defense has been just as good. The Tigers have only given up double-digit points three times - against Notre Dame-West Haven, Wethersfield and Shelton - with the season-high being 14. The unit also hasn’t given up any points this postseason after shutting out Newington 52-0 in the quarterfinals and Maloney in the semis.

Like St. Joseph, Daniel Hand has a stellar linebacking corps consisting of Sahne Reiner (71 tackles, 12.5 TFL), Austin Doyle (57, 15.5) and Luke Wagner (56, 5.5). Kevin Nizolek leads the team in sacks with 9.5 with Doyle and Ben Corneillo tied for second with five.

On the back end, Colin Telford has made it a habit of taking the ball away. The junior defensive back has five picks with Aiden Patrick and Conner Quinn following with three each.

“We have to make sure we do our basics well,” Wagner said. “We have to do all the simple things right and come out with great intensity. We should have everything prepared for. Everyone is held to a standard. We’re never satisfied. We don’t anything for granted. We put in so much work in the offseason to get to this point. We’re ready.”

It should lead to quite the showdown on Saturday.