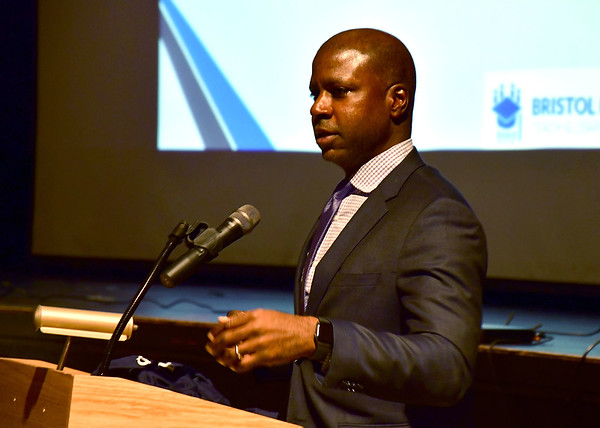 Guest speaker Malcolm Huckaby during the convocation held at Bristol Central High School as teachers and administrators prepare for the start of the school year. | Mike Orazzi | Staff Buy this photo
Published on Sunday, 8 September 2019 21:08
Written by

The Bristol Sports Hall of Fame will hold its 23rd annual induction program on Friday, Nov. 22, at the DoubleTree in Bristol.

“I am pleased to announce the Bristol Sports Hall of Fame Class of 2019,” Hall of Fame president Bob Kalat said in a press release. “The seven individuals being inducted are truly deserving and will join past inductees as outstanding representatives of Bristol’s sports history.”

Caron, a graduate of Sarah E. Reynolds School and Bristol High, went on to study at Cheshire Academy, UConn and St. Lawrence University. He was a standout multi-sport athlete at each level who went on to coach youth sports in Bristol, including 20 years with Bristol Midget Football.

He was a member of the Bristol Blues semi-pro team and the Forestville Eagles. Honors passed his way have been multiple, including being honored by the Bristol Tramps in 1984 with the Harp Broderick Award.

Deschaine was a three-sport success in soccer, basketball and baseball, the latter as an All-State pick at Bristol Eastern in 1996. He went on to earn All-American honors in baseball at Brandeis University in setting school all-time offensive records.

He was a member of the 1994 American Legion state championship team and was drafted in the 10th round of the 1999 draft by the Chicago Cubs, reaching the AAA level of the minor league ball. He was inducted into the Torrington Twister Hall of Fame in 2005.

Huckaby led Bristol Central to a state title in basketball as an All-State player in 1989. He went on to help lead the Boston College men’s basketball team to the NCAA Tournament Elite Eight in 1994. He was inducted into the Boston College Varsity Club Athletic Hall of Fame in 2004 and the 2015 ACC basketball Legends class.

Also a baseball player in high school, he was drafted by the Houston Astros. He played basketball overseas and in 1997 played pro for the Miami Heat. He joined ESPN in 2012 as a basketball analyst.

Following college, she played for the Greenwich women’s soccer team for 15 years, 10 as team captain. After her playing career, she took up recreational sports of many kinds.

Parente, a 1968 Bristol Central graduate, has coached and been active in numerous Bristol sports-related programs at different levels while earning multiple recognitions for his efforts along the way. Those include receiving the assistant wrestling coach of the year award from USA Wrestling Magazine, the Bristol Tramps Service Award in 2006, New England Council of Schools Hall of Fame in 2009 and The Ralph Papazian Award in 2003. He served as CIAC state wrestling site director and wrestling state tournament director for many years.

Pecevich played football, basketball and baseball at Bristol Eastern as a member of the class of 1979. He batted .450 and .426 in his junior and senior baseball seasons, earning All-State honors.

He was also an outstanding two-way football player, earning All-State honors in his senior season. He once struck out 18 consecutive batters as a member of the FLL Dodgers. He went on to play college football at UMass.

Whitehead played sports at both Bristol Central and Bristol Eastern as a standout football, basketball and track participant, with basketball being his forte.

His playing days included being a member of the Terryville Oasis, a member of the New England Basketball Association, where his team won many titles and he won all-league recognition. He had NBA tryouts with the Washington Bullets and played with the Harlem Wizards.