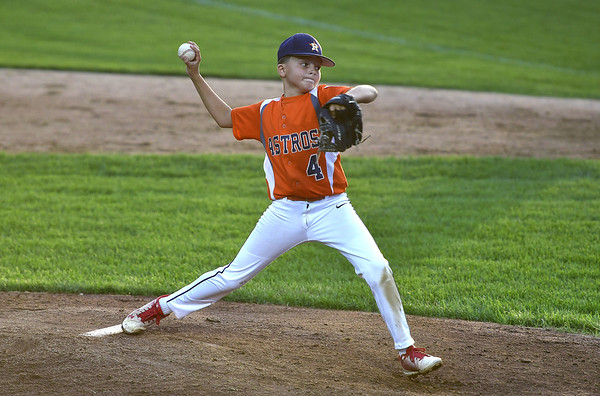 BRISTOL - Friday nightâ€™s City Series contest between the Edgewood Aâ€™s and the McCabe-Waters Astros featured a number of scoring chances for each side, but it was the Astros that made the most of their opportunities.

After Edgewood stranded the bases loaded in two consecutive innings, McCabe-Waters exploded for five runs in the top of the fourth to grab a commanding 7-0 lead and stay alive in the Bristol City Series with a 15-2 win.

The game had been postponed twice due to rain from Wednesdayâ€™s original scheduled date.

The Aâ€™s will fight for their tournament lives on Saturday night against the Forestville Dodgers, the team that beat them in the first City Series game, at 7 p.m.

Looking to stay alive in the tournament, the Astros jumped out to an early lead on back-to-back hits to start the top of the first. Mason Allen greeted Edgewood starter Alex Kuzniara with a leadoff double, and was immediately brought home on a single to right by Chase Dauphinee, who advanced to second on a throw home to try and nab Allen.

Dauphinee moved to third on a pitch that skipped to the backstop, which paid off for McCabe-Waters when Lincoln Bashaw bounced a grounder to second, allowing Dauphinee to score and give the Astros a 2-0 lead.

Edgewood threatened to provide an immediate response in the bottom of the first, using a single by Connor Murtaugh, a walk to Randy DeNoto and a catcherâ€™s interference to load the bases, but Dauphinee secured a big strikeout of Anthony Paulauskas to escape unscathed.

The Aâ€™s had another chance in the bottom of the second, when a pair of walks put runners on first and second with just one out. Edgewood tried a double steal with Murtaugh at the plate, but Alex Corvo was nabbed at third, which proved to be more costly after Murtaugh laced a single to right to put runners at the corners, before Dauphinee struck out Alex Kuzniarz to get out of another jam.

Another opportunity was squandered in the third, when Edgewood put together another rally that loaded the bases with one out, thanks to a pair of walks and a single by DeNoto. Once again, Dauphinee was up to the challenge, recording back-to-back strikeouts to keep the shutout intact.

â€śI just tried to throw strikes and not give up runs,â€ť Dauphinee said. â€śIt hurts to give up runs early, so if I kept it to just one run over the first few innings, I knew that would be great.â€ť

Through three innings, the Aâ€™s left eight men on base.

The Astros made Edgewood pay in the top of the fourth, putting runners on first and second with one out to bring up the top of the order and Allen, who bounced a single up the middle to score Ben Begoin and stretch the lead to 3-0. McCabe-Waters wasnâ€™t done, as singles by Dauphinee and Tom Pirog scored to more, and Bashaw followed with a blast to the fence in right center, good for an inside-the-park home run to give the Astros a 7-0 lead after a five-run outburst that saw seven consecutive hits recorded.

Bashaw struck again in the fifth with an RBI triple to make it 10-0, and once more in the sixth with a three-run double to make it 15-1, with Bashaw accounting for nearly half of the teamâ€™s RBI, tallying seven of his own.

â€śI was actually kind of scared at the plate because I sprained my finger on Monday,â€ť Bashaw said. â€śBut once I got that first hit I was feeling good.â€ť