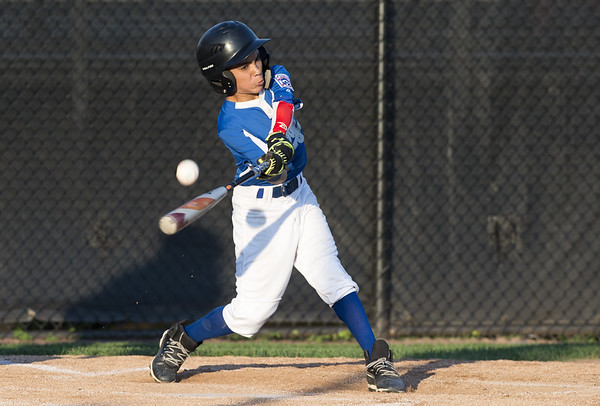 The Forrestville Dodgers vs the McCabe-Waters Astros in the first game of the city series at Breen Field on Monday August 19, 2019. Dodgers Hector Martinez (8). | Wesley Bunnell | Staff Buy this photo
Published on Tuesday, 20 August 2019 17:53
Written by ZACK CARPENTER

BRISTOL - In the moments after his team had lost a 4-3 heartbreaker to Southington North in the 12U Little League baseball district tournament on July 8, Forestville manager Corey Simard could not help showering his players with immense praise.

Words such as “special,” “love” and “proud” were all dished out like hotcakes to pinpoint exactly why it hurt so bad to see the season end a couple steps shy of winning a district title.

After mentioning the players as a whole collective unit, Simard then proceeded to rattle off a list of names from that team whom he believed had a bright future ahead.

Aiden Lopez, Dante DePass and Hector Rivera-Martinez were three of those players.

“You’ll see their names down the road,” Simard said at the time.

Turns out, “down the road” was a short trip.

All three players helped the Forestville Dodgers on Monday night jump out to a 1-0 record in the City Series with a 7-4 victory over the McCabe-Waters Astros at Breen Field.

That trio was at the core of a victory that has it in the driver’s seat of a potential championship.

From Lopez’s electric 12-strikeout no-hitter in four innings (86 pitches) to DePass’ two RBI singles - one that was smoked to deep dead center field on the hardest-hit ball of the game - and Rivera-Martinez’s masterful work behind the plate, all of them had their fingerprints on the win.

“Without a doubt, there’s a lot of special talent there,” Forestville manager Clay Roberts said. “They’re all extremely special talents, but besides that, it’s them as human beings. They’re just extremely respectful on and off the field, and that’s what we love about them.”

There was no better example of what Roberts references than what Lopez did in the first inning. After ringing up the first two batters he faced, Lopez pegged Astros three-hole hitter Tom Pirog in the shoulder with an up-and-in fastball.

Pirog walked to first base … and so did Lopez.

After Pirog rubbed his shoulder and shook off the impact of the seams, he turned to see Lopez give him a fistbump and make sure he was OK.

“I didn’t mean to [hit him] so I just wanted to see how he was feeling,” Lopez said.

Roberts added: “He is an amazing, amazing kid. He does a great job. Besides his special talent, he’s got a great attitude. His attitude is the greatest attitude that a kid at his age can have. He’s very respectful to the game.”

All three of them are courteous to the game, even though each of them has yet to become a teenager.

“For a 12-year-old to, first off, have the talent they have and second, to be the kids that they are and have the qualities that they have off the field, you can’t teach that,” Roberts said. “It’s just an absolute joy to coach them.”

It’s hard to believe that Lopez, DePass and Rivera-Martinez actually are only 12 years old. Watching their body language on the field, how they handle themselves and seeing their talent, they certainly seem to carry themselves like polished baseball players.

“When they come to practice, there’s no fooling around,” Roberts said. “We have a lot of fun, but when you’re on the field, once you cross over from the dugout, it’s put your game face on and you have to play.”

One of the positives making the game even more fun for that trio? Their friendship.

“It feels great because we bond together,” Lopez said. “We always hang out. We’re like brothers to each other. That’s why we’ve been playing good and made it all the way to here.”

And it’s like that with each of these Dodgers, and it’s why they could be hoisting a first-place trophy come Monday or next Wednesday.

“I’ll just say this, it is an absolute joy to coach each and every one of these kids because none of them have attitudes. They’re just great kids. Forget the winning and losing. They’re just a special group.”