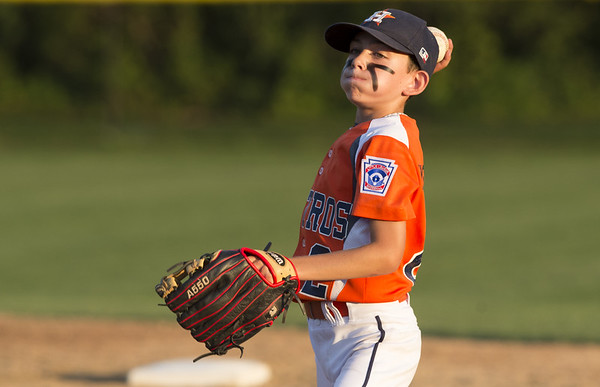 The Forrestville Dodgers vs the McCabe-Waters Astros in the first game of the city series at Breen Field on Monday August 19, 2019. Second baseman Mike Demers (2). | Wesley Bunnell | Staff Buy this photo
Published on Tuesday, 20 August 2019 17:48
Written by ZACK CARPENTER

BRISTOL - Even trailing by five runs after struggling to string hits together all game, the McCabe-Waters Little League baseball team wasn’t quite done.

In the Astros’ opening game of the City Series against Forestville on Monday night, they didn’t panic despite the 7-2 deficit. Instead, they stayed calm before utilizing a pair of singles and several walks to score two runs, load the bases and send the game-winning run to the plate with two outs.

That’s where the comeback ended in a 7-4 loss to the Dodgers, but that was enough to impress the leader of the team that McCabe-Waters will now face on Wednesday at Breen Field in the second game of the series.

“They’re a good team,” Edgewood manager Mike Denoto said. “They obviously have some good pitching and good hitters. I think they showed that tonight, and they don’t give up. I think that’s huge.”

Perhaps the least-surprised person on the field in the Astros’ resilience was the man who watched his team win 17 games and lose just one headed into the contest against Forestville.

“These kids play tough,” McCabe-Waters manager Matt Pirog said. “This is probably the best bunch of kids I’ve ever coached in the 20-something years I’ve coached. These kids fight hard all the time. They never give up. They’ve never given up. They’ve found a way to win every time so they’ll get back at it.”

Piror says he has been coaching baseball since 1996, but he hasn’t had a group quite like this before in terms of its ability to constantly scratch, battle and win through a variety of methods.

“We won 17 games, but we won 17 different ways,” Pirog said. “We’ve been down eight runs and come back to win. We’ve won by 20 runs. These kids never give up. We’ve been down in the fifth inning by five and come back. … It’s never the same thing, and that’s what we tell them before every inning. That we’re gonna find a way to win. It may not be the same way that we did yesterday, but we’re gonna fight hard and battle every single game.”

But now, the Astros will have to fight back from an 0-1 start in the series pitted against Denoto’s talented roster, one that features a pair of strong arms.

“I think I’ve got a couple of the best pitchers in the league in Owen Meyers and Alex Kuzniara,” Denoto said. “Alex is a chess player. He’s fun to watch. He knows what he’s capable of doing. I think that’s what makes him special. And Owen just comes at you hard, a lot like Aiden tonight. Same style.”

Denoto - who also mentioned Meyers and his son Randy Denoto as “a couple of the best hitters in the league” - referred to Aiden Lopez, Forestville’s ace pitcher who did not allow a hit in four innings on Monday and recorded all 12 of his outs via strikeout. Lopez was one of the main reasons Pirog didn’t feel as bad following his club’s defeat.

“We just had a couple rough innings. We faced a great pitcher today. That kid was amazing,” Pirog said.

Pirog says he was happy his team didn’t beat themselves and instead just fell victim to a good team’s good performance.

“We didn’t give them much. They got a couple key hits when they needed it and got some baserunners on,” Pirog said. “If we can play defense like we played here, I’ll take that, and if we can get the pitching that we got at the end of the game there from Tom Pirog and Billy Zabawa, I think we’ll be all right.”

It should be a competitive matchup between a pair of gifted teams, and something will be settled on the field.

“I think we’re a little bit better of a team,” Mike Denoto said. “But we’ll find out Wednesday.”