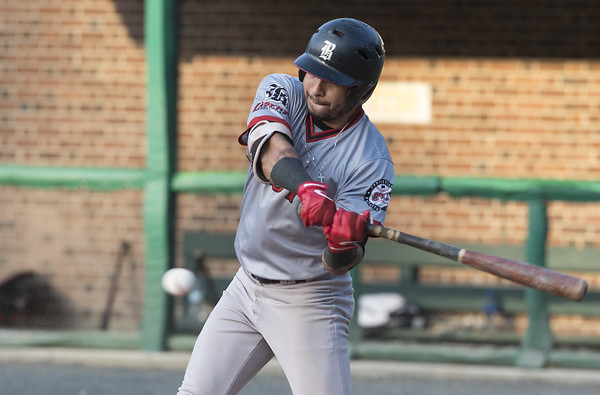 BRISTOL - In the playoffs, all it takes is for a team to get in to become a threat. Just ask the Bristol Knights.

Earning a spot in the winner’s bracket by a tiebreaker when the regular season ended, the Knights have now rattled off three straight wins, including a 4-0 win over Elmer’s Angels on Monday night at Muzzy Field, and are in the Connecticut Twilight League championship thanks to a trio of two-out hits and a bend-don’t-break performance from Rob Bibisi on the mound, allowing a hit in each inning but going the distance in the shutout win.

“He threw a lot of strikes,” third baseman Rick Barrett said of Bibisi’s outing. “He’s been a force all year long, throwing a lot of innings and getting us to where we are now.”

The Knights, just 10-11 through the regular season, now await their opponent in the final, while the Angels move into the elimination bracket and fight for their playoff lives on Tuesday night back at Muzzy.

The Knights struck immediately with a clutch two-out single from Kyle Pileski in the top of the first. Julio Ortiz-Rivera led off the inning with an infield single deep in the shortstop hole, and advanced to third on a groundout by Barrett and a stolen base. Pileski drove in Ortiz-Rivera with a line drive single to center, giving Bristol a quick 1-0 lead.

The Angels threatened to tie the game in the second when Scott Kelleher led off with a booming double into the gap in right center, but Bibisi settled down to force a groundout and back-to-back strikeouts to maintain Bristol’s narrow lead.

“Rob was huge,” Oakes said. “He bore down when he needed to, mixed up his pitches and threw strikes. Just huge.”

Bristol tacked on in the fourth when Earl Oakes led off the inning with an infield single that was almost robbed when the second baseman Marshall made a full-extension diving stop, but couldn’t throw out Oakes in time. Oakes advanced to second on a passed ball and was brought home by a double to left by Steve Clout, which just dropped in front of a diving Tom Scully to give the Knights a 2-0 edge.

Angels starter Adam Antonini was chased in the fifth after stumbling through an inning that started off as seamless as he could have hoped for. Two straight groundouts put Antonini on course for an easy inning, but a two-out walk to Rick Barrett opened the door for another Bristol rally. Pileski followed Barrett’s walk with a single to left, and Oakes laced a single of his own into left to score Barrett and give the Knights a three-run lead, while Elmer’s went to its bullpen.

The Knights wasted a bases-loaded, no-out chance in the sixth, but another two-out knock in the seventh came from Clout to make it 4-0, which was plenty of support for Bibisi. Clout and Oakes each finished with three hits to lead the offense.

“I’m a teammate of theirs, but it’s nice to watch and be a fan,” Barrett said of Clout and Oakes. “They’re great ballplayers and always have been.”