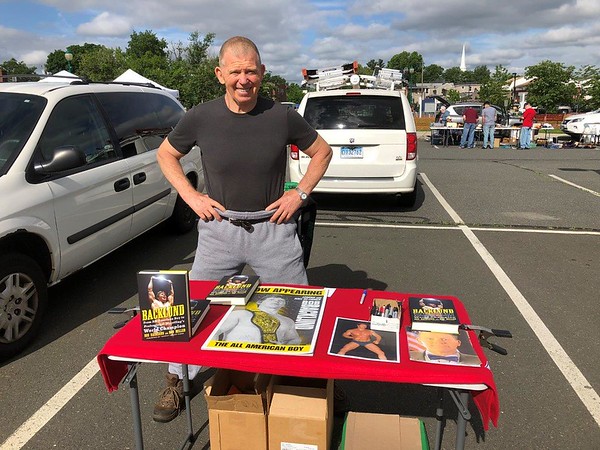 Bob Backlund was one of the biggest names in professional wrestling, especially in the late 1970s and early 1980s, and area fans can get the chance to meet the former WWE star in person this Sunday.

Backlund, who lives in Glastonbury, takes every chance he gets to interact with local residents, even making a surprise visit to the Newington Kiwanis Big K Flea Market last weekend. He’ll return again this Sunday.

“Truthfully, I didn’t even know I was going to end up there,” Backlund said of his appearance in Newington. “I just showed up and had a lot of fun. I even did a little exercise while I was there and some of the people had a lot of fun with it.”

Backlund sees the public appearances as a great way to connect with fans, but also use his own personal experiences to help motivate people.

The Minnesota-native had to overcome obstacles seemingly every step along the way of his life.

A professional wrestling career was the last thing on Backlund’s mind growing up. He described the first 15 years of his life as “a complete disaster.” He was not a good student, even failing third grade. Backlund also said his father was a drinker, which helped motivate him to stay busy with sports.

“I tried out for football, track and wrestling so I didn’t have to go home,” Backlund said. “I was a small kid at the time and wasn’t a good athlete, so I got beat up all the time. But that was a better option than going home.”

It got so bad that Backlund would sleep in the trunk of his car for days at a time.

“I remember sitting in my car with $5.20 in my pocket, wondering how I was going to get my next meal,” Backlund said. “Nothing was given to me, but I knew I could get through it and be successful.”

Backlund indeed became huge success in wrestling, which has spanned 40 years, both professionally and as an amateur. He is most known for his time in the ring with the World Wide Wrestling Federation - now known as World Wrestling Entertainment. He won the heavyweight championship twice in his WWWF tenure and was inducted into the WWE Hall of Fame in 2013.

Along with being a world-renowned wrestler, Backlund has had the opportunity to coach the sport as well. He was away from professional wrestling from 1984-1992, and during that time, moved to Connecticut and helped coach wrestling at Central Connecticut State University, Rocky Hill High School and Bacon Academy in Colchester.

“I wanted to get kids involved in amateur wrestling because I learned so much from it,” Backlund said. “Truthfully, amateur wrestling changed my life, and I wanted those kids to experience that. It was a very motivating opportunity for me, and I had a great time with it.”

Even at 68 years old, Backlund still finds time to wrestle. He just returned from a trip to Japan in which he squared off with fellow WWE Hall of Famer Tatsumi Fujinami. He describes himself as a “spring rooster” because he feels as though he is in as good shape as he was in the middle of his professional career.

“The way I see it, no matter how old you get, the more you stretch and exercise, the younger you feel,” Backlund said.

He also has a message.

“I tell people, ‘I started from dirt bottom,’” Backlund said. “I say, ‘if I can do it, you sure as heck can do it.’ I want to inspire as many people as possible as I can for the rest of my life. Age should not make a difference.”

As a wrestler, coach and person, Backlund is proud of what he has been able to accomplish in life.

“I just take life one day at a time,” Backlund said. “I don’t get mad. I don’t get overly excited. I’m on a mission to get people to smile. It’s been a great journey and I’ve loved every day of it.”