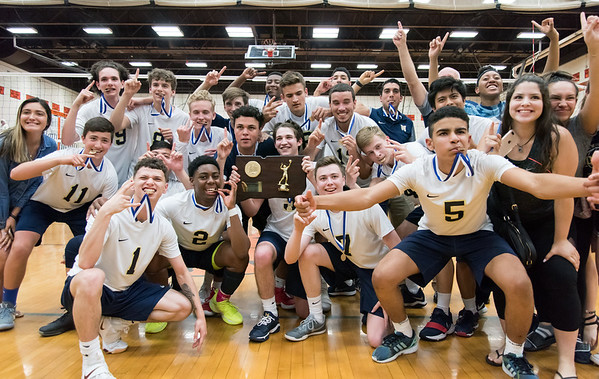 SHELTON - It was battle of attrition Thursday night in the Class M boys volleyball championship at Shelton High School between Newington and Joel Barlow.

And it was the Indians who held out in the end.

“Joel Barlow and us have had a long history of intense matches in the state tournament since we’ve opened Class M,” Newington coach Curt Burns said. “We expected nothing less. They surely showed us tonight that they were a very tough out and we’re very happy to come away with the victory tonight.”

The largest lead in the fifth set was three by the Indians. But Joel Barlow used a four-point run to take a 7-6 lead.

Newington, however, didn’t give up a lead the rest of the set.

With the 14-13 lead, the Falcons’ Finn McCaffrey went for a big hit at the net and it went too deep to end the game.

“We told ourselves don’t get worried, we’ve went through so many five-setters this season,” the Indians’ Louis Egbuna said. “When it was going back and forth we got a little flustered but we told ourselves to relax and we pulled it off.”

The presence at the net was strong for both teams all night long. Egbuna, Teddy Fravel, Leonel Caceres and Mason Romano all had moments for Newington throughout the evening to stave off a strong counter by McCaffrey and Matthew Cruz.

Setting up Newington all night long was senior Daniel Cloutier, who played a pivotal role in the game with 54 assists, nine digs and three blocks.

“They have a really strong block,” Cloutier said. “The key was mixing it up where I set it specifically and mixing the middle. Our hitters did a great job going around the block.”

The turning point in the game may have been the first set though. Down 23-18, the Indians were being outplayed throughout but won six of the following seven points to tie it up 24-24. Egbuna won a point at the net to put the Indians ahead 25-24 and then sophomore Mason Romano delivered a huge spike to capture the first set.

“My boy Dan told me what to do and I just followed his lead,” Romano said. “He’s such a good player and sets us all of us up in good spots.”

Grabbing the first set having led in just 12 of the 50 points played was crucial, as it took the Indians a couple sets to find their rhythm.

Joel Barlow grabbed the second set 25-23 in an even tougher set for Newington. The Indians held a lead for five of the 48 points in the second set and Cruz was challenging them at the net.

Egbuna served Newington to a third-set win with seven straight points won in the middle of the set to put the Indians up 17-10.

His serving was big and Egbuna finished with 23 kills, seven aces and seven digs.

The fight in the Indians was the sign of a championship team and the final few minutes may have been a blur but Newington retained control of its dominance in Class M.

“It’s surreal, I can’t even tell you the last play,” said Caceres, who finished with 21 kills, seven digs and two blocks. “My mind is spinning and I can’t wait to go home and celebrate with my family and friends and embrace this feeling.”