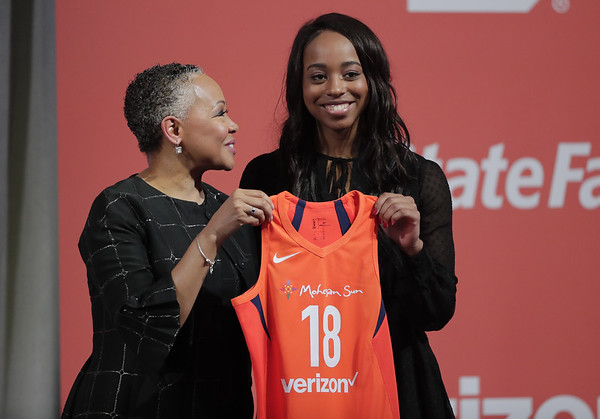 Duke's Lexie Brown, right, poses for a photo with WNBA President Lisa Borders after being selected as the ninth pick by the Connecticut Sun in the WNBA basketball draft Thursday, April 12, 2018, in New York. (AP Photo/Julie Jacobson) Buy this photo
Published on Friday, 13 April 2018 21:25
Written by CARL ADAMEC

MOHEGAN INDIAN RES. - Dee Brown was an NBA first-round draft pick by the Celtics in 1990 and took part in the WNBA draft as the last coach of the Orlando Miracle (2000-02), who would become the Connecticut Sun.

But nothing may have been tougher for him than what he went through Thursday as he sat with his daughter, Lexie, at the 2018 WNBA draft Thursday at Nike Headquarters in New York City.

“He was definitely more nervous than I was,” Lexie Brown said. “He’d hold my hand the entire time and kept saying, ‘It’s coming, coming next, coming next’ with every pick.”

It took about 45 minutes from the start of the draft, but finally he was right.

The Duke University guard was a first-round selection, the ninth pick overall, by the Connecticut Sun. She is the first daughter of a WNBA head coach to be drafted.

“My phone call with Lexie Brown was tremendous,” Sun coach and general manager Curt Miller said. “She’s grown up with a dad who is not only a former professional player but a coach. She has a very high ceiling in this league.

“We thought that we might have a choice between Lexie Brown and (UConn’s Kia) Nurse and we’ve debated that for weeks.

“It did play out that way and we’re excited to bring Lexie into our family. Ultimately you have to take the emotions out of it and take what you need and what’s best for the organization. We decided to go the 1-2 route rather than the 2-3, it can’t be more simply stated than that.”

Earlier Thursday, Connecticut traded its second-round pick in Thursday’s draft (No. 15 overall) and a second-round pick in 2019 to the Atlanta Dream for New Haven native Bria Holmes. The Hillhouse High graduate will not play this summer as she is pregnant with her first child.

The Sun also selected California forward Mikayla Cowling in the third round.

The deal for Holmes played a role in Miller’s decision to select Brown.

“That’s my GM hat,” Miller said. “My coach hat needs to win now and is always thinking about drafting for now.

“Bria Holmes is a long-term asset, a future asset. Knowing in the future that we had Bria Holmes also contributed to the pick of Lexie Brown.”

The 5-foot-9 Brown, who helped Maryland to the 2014 and 2015 NCAA Final Four before transferring to Duke for her final two seasons, averaged 19.4 points, 4.4 rebounds, 4.4 assists, and 3.7 steals as a senior. The Blue Devils reached the Sweet 16 before falling to UConn in Albany, New York.

One of her mentors with the Sun figures to be 2017 All-Star guard Jasmine Thomas, a fellow Duke graduate.

“You don’t know where you’re going and it’s a crazy night,” Brown said. “But I did have conversations with Coach so I knew there was a chance I would end up in Connecticut. I was definitely excited and super-happy.

“I’ve watched them play and they are fun to watch. I’m going to do whatever they need me to do on the court and I’m ready to learn from all of them.”

She may be best known by state fans here as the player who fouled Katie Lou Samuelson during a Nov. 17 game at Gampel Pavilion that led to a left foot sprain which would cost Samuelson four games.

“I am so grateful to the Connecticut Sun for giving me this opportunity. They’re a great team and I can’t wait for this challenge,” Cowling said.

The Sun open training camp on April 29, and will host a preseason tournament at Mohegan Sun Arena May 7-8. The regular season opener is May 20 here against the Las Vegas Aces.