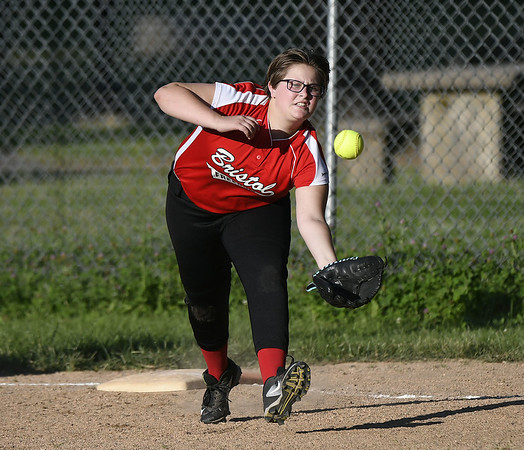 BRISTOL - In an Little League Softball City Series elimination game, the Nitro exploded for 18 runs in the first inning on their way to a 22-8 victory over the Freedom on Thursday night.

While the first inning was tough, the Freedom hung in there and never gave up.

“These girls just love to play ball,” Freedom coach Laura Lamar said. “It may have been lopsided, but they still fought and cheered each other on and gave each other confidence.”

Bouchard led off the first inning with a walk and stole second to set the tone for the Nitro. She also had a two-run double and a walk.

Webber was a home run short of the cycle in the opening frame. Her first inning infield single started the scoring. She also doubled and tripled.

Shorette had a single and a double. She also drew a walk in her first at bat. Bounafede had a two-run single to put her team up 10-0.

Between the four, they combined for 16 of the 22 Nitro runs.

Haley Beebe came in to pitch in relief during the second inning with two outs and her team down 18-0. She brought stability to the mound, showing great composure.

“She was very consistent,” Freedom manager Amanda Hill said. “She was able to keep her frame of mind no matter the situation. She’s a great player for especially how young she is.”

After coming into the game, Beebe allowed hits to Bounafede, Shorette and Webber and walked Jillian Cretella.

While she struggled at first, Beebe settled down and didn’t allow a run the rest of the way.

“Absolutely amazing kid. To be 9 years old and be out there in front of an audience like she has and stand up there tall and proud, she’s an impressive kid and is going to go far,” Nitro manager Barrett Cretella said.

“If she keeps up with it she’s going to turn out to be an excellent pitcher. To be 9 years old and be out there with a bunch of 13-year-olds is awesome.”

Shorette started the game for the Nitro, with a great lead right out of the gate. With top pitcher Ashley Serafin unavailable due to the innings limit, it was on Shorette’s shoulders to lead her team to face the Blast tonight, looking to force a final championship game on Saturday.

While she struggled with command, Shorette hung in there and was able to finish the game, allowing eight runs. She finished with 17 walks and had eight strikeouts.

While facing a tough challenge in the fourth inning with the bases loaded, Shorette struck out Meredith Valley to end the contest and advance.

“I’m really happy to get to face the Blast again and hopefully we beat them and win the City Series,” Shorette said.

Nitro will have a rematch with the Blast on Friday. The last game between the two went into extra innings.

“Girls played awesome,” coach Cretella said. “They’re a hard-nosed and hard-driven team and they know what they want and they won’t stop until they get it, so I’m looking forward to tomorrow.”