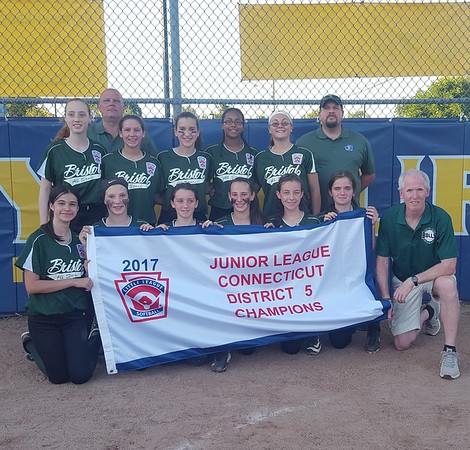 The Edgewood Senior Little League Baseball team has claimed the state title and will next play in the Senior League Baseball East Regional Tournament, starting Thursday in West Deptford, N.J.

Edgewood coach Steven Serben reported that, “The battle cry from day one at the beginning of June was ‘Get the state title back.’”

That’s what the team did on Monday night, claiming its third state title in the last four years. Plainfield won the title last year.

Edgewood opened play on Saturday with a 7-5 loss to Plainfield, after James Hall pitched 3 2/3 innings of stellar relief for the local all-stars.

The Bristol team trailed 7-2 entering the top of the seventh and rallied for three runs, putting the tying runs on base, but the Plainfield center fielder made a sliding grab on a line drive hit by Jon Pierce to end the game.

James Rasmussen led Edgewood with three hits, while Carson Sassu, Trevor Mays and Will Pierce all had two hits and Anthony Marrotti drove in 2 runs.

Edgewood rebounded on Sunday against host Killingly with a 12-2 win. Edgewood blew the game open with seven runs combined in the third and fourth innings.

Noah Gibson started on the mound and threw a complete game with six strikeouts. Will Pierce led the offense with three hits, followed by Gibson and Jon Pierce, who had two hits each.

With the win, Edgewood got to a winner-take-all showdown on Monday against Plainfield for the state title and a trip to the 10-team East Regional in New Jersey.

Mays spun a three-hitter with five strikeouts over 6 2/3 innings as Bristol regained the state title with a 5-2 victory. Marrotti came in and got the last out and the celebration was on.

Sassu led the offense with three hits, including two doubles, while Gibson, Mays and Will Pierce all had hits.

“It took Edgewood 365 days to beat the same team on the same field to recapture the state title banner,” Serben noted. “The team had a saying before the game and carried it throughout and that was, ‘not tonight.’”

The Bristol team will start play in the East Regional against host West Deptford Little League on Friday night. Edgewood won the regional in 2014 and has also been there previously in 2013 and 2015. The winner of the regional moves on to the Senior League World Series in Easley, S.C., the first week in August.

The Edgewood manager is Mike Ziogas and coaches are Bill Mason and Steve Serben. The team is comprised of 15- and 16-year-olds. In addition to Gibson, Hall, Marrotti, Mays, Jon Pierce, Will Pierce, Rasmussen and Sassu, they are: Bryce Curtin, Cameron Ohara, Spencer Sinkowich, Mason Porier, Gabe Bartolome and Derek Mason.

The Bristol Junior League Softball all-stars fell short in advancing to the state championship series by losing both games to Granby/East Granby/South Windsor during the Section 2 Tournament.

East Granby/Granby/South Windsor defeated Bristol 12-1 in the first game. Brooke Soucy had two doubles for the only hits for Bristol’s offense.

In the second game, Bristol jumped out to a 3-0 lead, but East Granby/Granby/South Windsor came back with six runs in the second inning and held on to defeat Bristol 15-5 and claim the Section 2 title. Shelby Smith had three hits, including two RBI singles. Soucy, Lyzah Corliss, Janessa Bartell and Olivia Darby each had a hit.

“We had a good week of practice leading up to Game 1,” manager Darrell Darby said. “I was very pleased with the kids’ effort and focus during practices.

“I knew hitting would be the key to give us a chance, but it was baffling how we didn’t hit. Their pitcher was hittable. Like the ‘Curse of the Bambino,’ perhaps it was the curse of the raccoon, since two of them were found in our dugout just before the game started.

“The kids did better in Game 2, but we just couldn’t find a hole and put together a string of hits in each inning. We had a very good team with a lot of talent, but not to sound sour grapes, we did not have any kid on the roster that played travel ball, but faced a team that had at least half on their roster playing travel ball.

“Overall, this Bristol Junior team had a very good season that works together.”