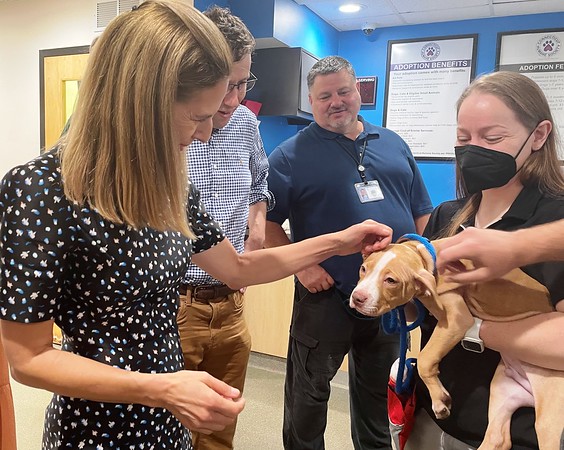 NEWINGTON - State officials made a special visit to the Connecticut Humane Society Wednesday morning to spotlight its good works and to raise awareness about the correlation between human and animal abuse.

“What I know from my work on preventing domestic violence is that oftentimes, when there is an abusive spouse in the home, there can be abuse of children and animals happening there as well,” Bysiewicz said.

According to national statistics, animals are harmed in 88% of homes where a child was physically abused and children exposed to domestic violence are three times as likely to be cruel to animals. Additionally, 75% of female survivors of domestic violence report their pets were threatened or intentionally harmed by their partner.

CT is one of the only states in the country addressing this problem with cross-reporting laws.

“Actual laws on the books related to animal safety preceded child safety,” Commissioner Dorantes pointed out. “The expectation of our partnership with the Department of Agriculture is that if we are working a case and there are animals in the home we will report it to them and vice versa, if there are children on the premises where they are.”

Last year, the DCF reported 45 cases to the DOAG and their staff reported 150 to the DCF.

CHS staff also took the opportunity to introduce state officials to dogs in their shelter and give them a tour of the Fox Memorial Clinic, where animals’ basic health needs are met and where spay/neuter services are provided to pet owners in financial need.

“We want to highlight the great work the Humane Society does to rescue animals and find them forever homes,” Bysiewicz said.

Sometimes a human and their pet both need rescuing. Many foster parents will accept a child as well as their dog or cat, if the two are close and both need a good home.

The CHS works with volunteers from the community who foster animals until they are adopted.

“I am so thrilled you are in our community,” Sen. Lesser said. “I know staff here work day in and day out to make sure we take care of our animals.”

After petting and playing with some of the dogs in their care, Lesser added, he would have to explain to his own rescue dog Lucy where all the new smells came from.

“When I meet people around the state and say I represent Newington they say, ‘Oh that’s where the Humane Society is,’ because of all the amazing work you do here,” Rep. Turco said, encouraging people to consider pets of all ages and abilities for adoption.

“We all love the puppies, but let’s not forget about the older dogs and those who are disabled,” he added.

“We want the number one thought for pet acquisition to be shelters,” Bias said just as a woman walked into the facility asking for free pet food for her dog.

“As a non-profit,” he added, “we depend on financial contributions to keep the lights on and to give people access to medical services and pet food.”