Erica Drzewiecki | Staff -- Handmade wreaths on display during a Maker's Mart inside the New Britain Museum of American Art Sunday. Buy this photo 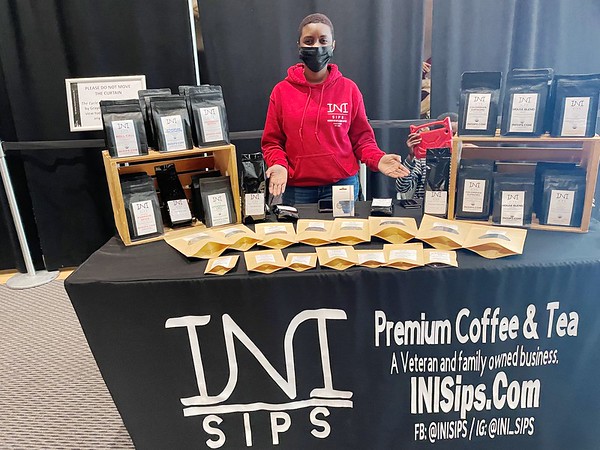 NEW BRITAIN - Local artisans were special guests of the New Britain Museum of Art during its annual Holiday Celebration and Maker’s Market Sunday.

They brought their handmade and homemade creations to sell to visitors, who took the opportunity to do a little holiday shopping while enjoying the museum’s galleries.

Gourmet coffee and tea company INI Sips, based in New Britain, offered a variety of its specialty products for sale.

“We love New Britain and we love being here,” said Davina Ismail, who owns the company with her husband.

Their coffee is already sold in the NBMAA’s cafe and in local stores, including Angelo’s Market.

“New Britain’s been very good to us,” Ismail pointed out. “We definitely support local.”

INI Sips opened in fall of 2019 and has survived the pandemic in part due to its strong community following.

“We ship all over the country now,” Ismail said. “We’re small but mighty.”

Artist Cindy Koniushesky’s booth at the Maker’s Market featured jewelry, knit items and pottery, all of which she crafted herself.

“I do a lot of casting,” Koniushesky said, holding up a necklace that resembled a shiny, precious meteorite. “This is the fourth time we’ve been here for this,” she added. “It’s wonderful. The museum is beautiful.”

For artisans like these, who often sell their wares in booths at craft fairs and festivals, showcasing their creations at the NBMAA presents a unique opportunity.

“One of the biggest reasons I do it is because this is such a beautiful museum,” said Steven Bernard, of High Ridge Pottery. “It does feel extra special being a part of this environment,” the Glastonbury resident added.

Selling her own fine art from a table by the entrance was Sue Melz of Middlefield.

Many of the pieces she had on display featured warm beach scenes reminiscent of the summer season that now seems so distant.

“My friend Jeannie told me she had been successful here a couple years ago so I thought I would try it out myself,” Melz said. “I’m just delighted to be here today.”