The Brit in downtown New Britain promises to be 'urban oasis' with apartments, retail to attract younger crowd 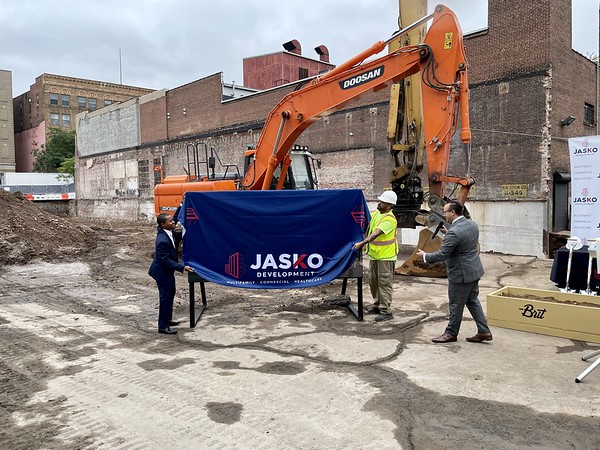 NEW BRITAIN – Those in attendance for the unveiling of the architectural rendering for The Brit had looks of amazement as Avner Krohn, chairman and CEO of Jasko Development, went over the rendering for the brand-new mixed-use development in detail.

“On the corner of Main and Bank Street, the new building will come out to the end of the lot. There will be a few spaces for loading and unloading, but parking is going to be in the garage,” he said. “The lower façade is kind of a rustic brick – think about the meat packing district in the city.”

The design of the building will consist of shades of grey and black with modern and contemporary materials.

“We want it to be fun, so there’s neon – The Brit sign is in neon,” Krohn said. “There is glazing on the entire corner of Main and Bank Street over here. People can choose to close their blinds or leave them open.”

“Six stories, 100 plus units, a big deal for right here,” said Jack Benjamin, director of planning and development. “It’s all about the mission and the vision we have going forward for the city, which is to turn over these vacant parcels, activate them, and put them back into tax roles, and do something better for the community than what was done before.”

The apartments on the fifth and sixth floors will be pulled out from the building.

“This way the idea is people in the building are interacting with the people on the street, so we have activity in the downtown,” Krohn said.

The fifth story will have an outside terrace instead of a rooftop.

There will also be 5,600 square feet of retail space.

“Our goal is to have one to two restaurants on the Main and Bank side as well as on Main Street,” Krohn said. “Many of the storefronts here are going to open up for al fresco dining all around the building.”

There will be approximately 5,000 square feet of outdoor space as well.

“We’re calling it an ‘urban oasis’ that will be going 200 feet all the way up to Main Street,” Krohn said. “There will be outside restaurant seating, garden space and space for tenants. There’s going to be grills, cabanas, all kinds of landscaping and lighting. You’ll be able to see that from Main Street with controlled access.”

There’s a gym on the corner of Bank Street also visible to the public.

“Again, it will be an interaction between the residents that live here and the people here in downtown. It’s something very unique to have that much space smack in the middle of downtown; outdoor space in combination with a more urban project,” Krohn said.

Jasko and the city have been working the past seven or eight months on the $19 million project.

According to the city, the project is a beneficiary of a long-term tax modification deal and environmental remediation funding and the city leveraged its Tax Increment Financing program to help seed the development. The development will drive affordability across the market by broadening the residential tax base, the city said. The City shared they partner with good developers and are willing to offer tax deals to projects that are certain to provide large, long-term net gains for the Grand List.

“Most importantly for the city and the community, this project is going to have a ripple effect,” said. “All of the planning and work we’ve done to determine the highest and best use of this property downtown has pointed to a development like this.”

According to Gerry Amodio, executive director, New Britain Downtown District, this project will ultimately produce over $2 million in taxes and local spending per year.

“Everyone who lives in this apartment building will spend about 40% of their disposable income within one to two miles of where they live,” Amodio said. “This will support our businesses and community programs, and for those of us who could remember the urban renewal of downtown, The Brit is the future they always promised us.”