Nearly 80% turnout in Connecticut election is a record 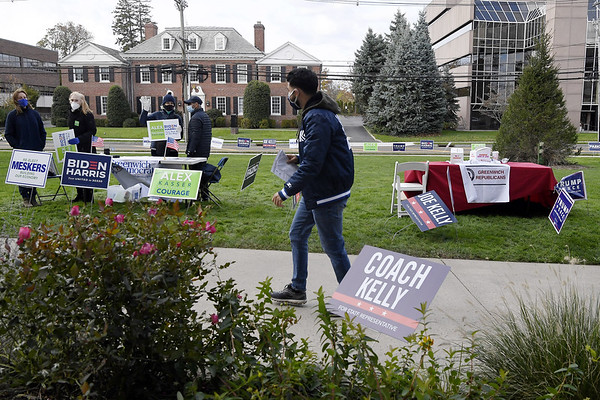 A man walks to the polling entrance past table for the Greenwich Democratics and Greenwich Republicans outside Town Hall on Election Day, Tuesday, Nov. 3, 2020, in Greenwich, Conn. (AP Photo/Jessica Hill) Buy this photo
Published on Wednesday, 25 November 2020 15:11
Written by

HARTFORD - A record 1.86 million Connecticut residents voted in the Nov. 3 election, a turnout of nearly 80% of registered voters despite concerns about the coronavirus pandemic, state officials announced Wednesday.

The election results that produced wins for Joe Biden in the presidential race and five fellow Democrats in all the state's congressional races were officially certified by Secretary of the State Denise Merrill, state Treasurer Shawn Wooden and state Comptroller Kevin Lembo.

This was the first year all state residents were allowed to vote by absentee ballot, due to the pandemic. Just over 659,000 absentee ballots were counted.

“The smooth, trouble-free election is a testament to the hard work of Connecticut’s registrars, town clerks, and the tens of thousands of Connecticut citizens who stepped up to be democracy heroes and work at the polls on Election Day,” Merrill said in a statement.

About 185,000 more people voted this year than in 2016, when turnout was nearly 77%. This year's turnout was officially 79.7% of a record 2.3 million registered voters. The second-highest turnout in recent presidential elections in Connecticut was 78.7% in 2004.