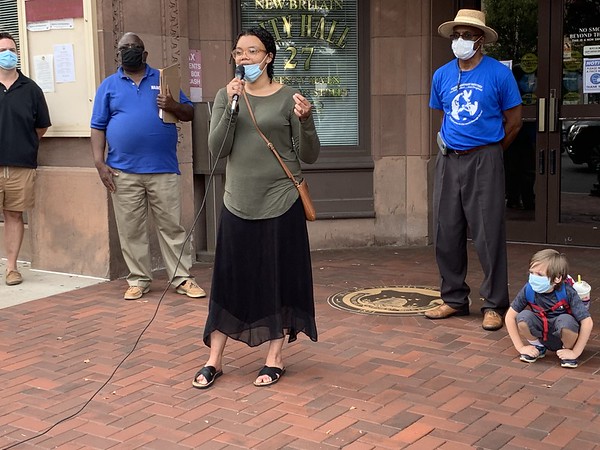 NEW BRITAIN - The New Britain Racial Justice Coalition continued its battle to create racial equality in the city and create a place that is safer for all people. The group held a rally outside city hall to spread messages of changes it wants to see in the city and important ways to help influence these changes.

The main points of the rally were to urge the city to remove the Christopher Columbus statue, change the name of Columbus Boulevard, install a citizen review board for police misconduct as well as the reallocation of funds from the police department in the education system and social services.

“This is more generally about racial justice and economic equality in the city,” Alicia Strong from the coalition said. “We’re asking for the defunding and redistribution of police funds to our schools and social services, we’re asking to pass the bill allowing absentee voting during the coronavirus [pandemic] as well as the police accountability bill.”

The event featured a series of speakers who addressed the various issues they want to see handled by the city. They also addressed the importance of voting, especially in local elections and with the upcoming primary in August. There were also two people from the Connecticut census office in attendance looking for people who had not yet submitted their census so they could help them.

“The census is all our responsibility,” Ronald Perry Davis, president of the New Britain branch of the NAACP, said. “We have to make sure that each one is counted because the problems that we have with education, housing and child care are all connected with the census. If the city doesn’t have the money, they can give us what we need.”

Tara Givens, the founder of the People’s Coalition of Central Connecticut, was one of the speakers and took the time to explain the importance of each of the changes they are looking to see made.

“I’ve heard great things about the New Britain Police Department, but nobody’s perfect,” Givens said. “To bridge that gap between the citizens of New Britain and the police, we need a citizens review board so common people like me can go to somebody that we’re more comfortable with to fight for us just in case a mistake happens. If the police have nothing to hide, then they shouldn’t have a problem with having a citizen’s review board, giving it power and having it funded.”

Part of the rally was to organize a media blitz, which was based around filling the inbox and voicemail of state senator Gennaro Bizzaro and other prominent members of the community to support these initiatives and back the bills they want to see passed.

“We’re calling all community leaders, whether that’s local or state legislators, business leaders, non-governmental organizations, we’re calling everybody to come together on a common agenda because we believe New Britain hasn’t always worked for everybody,” Strong said. “We want to make sure our poor Black and brown communities don’t get forgotten as they have for many decades.”

Part of the process of removing the Columbus statue is presenting the city planning committee with a petition. The coalition is looking to add another 1,000 signatures to their petition and anyone interested in signing can find it on its Facebook page. The planning committee is not slated to meet again until September, which the coalition is trying to have moved up, but are also looking to see Mayor Erin Stewart follow the lead of many mayors across the country who have made the executive decision to have their city’s statue of Columbus removed. However it is unclear if she has that power.

“Right now we’re just being told by the city that it has to go through the city planning committee,” Strong said. “So we’re trying to push for that.”

It has been nearly two months since protests began across the country after George Floyd’s death in Minneapolis and Strong said it is imperative that momentum remains behind the movement to make permanent changes to the system.